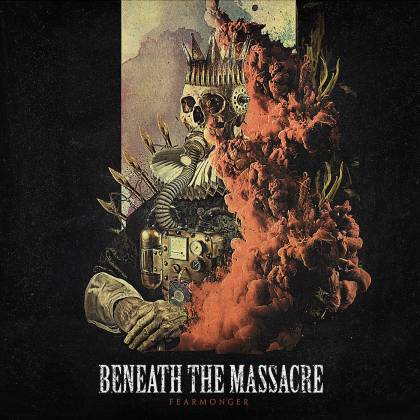 Assuming that you enjoy listening to music that sounds like an army of heavily armed robots bursting into your living room and bludgeoning you to death, BENEATH THE MASSACRE more than warrant their status as figureheads for extreme metal’s boundary-pushing wing. In particular, many fans of all-out brutality will have fond memories of hearing 2007's merciless and bleak "Mechanics of Dysfunction" for the first time. If ever there was a time to utter Nicko McBrain's immortal catchphrase, "Fuck my old boots!", that was it. Impressively, later albums sustained the Canadian quartet's creative progress while never being less than 100-percent destructive and breathtakingly precise to the point of sounding inhuman. There may have been faster, heavier or more musically adventurous bands, but even before you crank "Fearmonger" up, BENEATH THE MASSACRE clearly represent a level of lethal savagery that few can touch. As a result, the band's first album in eight years arrives with a certain level of expectation. Meanwhile, brutal, technical death metal is enjoying a particularly fruitful period, so there's a lot of competition out there, too.

Not that you will be concerned with thoughts of any other bands, or indeed anything other than preserving the structural integrity of your skull, when this utterly insane record erupts. Not so much a comeback as a devastating ambush, "Fearmonger" is berserk and belligerent; a psychotic, pedal-to-the-metal evocation of futuristic metal violence, executed with absurd levels of technical skill but simultaneously thrumming with adrenalin-swollen heart.

If the opening "Rise of the Fearmonger" feels like an overbearing statement of intent, with its scattershot tempos and comically ferocious kick-drum flurries, then you might expect BENEATH THE MASSACRE to ease off the accelerator a couple of times during this album's 30-minute duration. Sure, there are slow, slamming grooves and the occasional passage of atmospheric clangor, but for the most part "Fearmonger" is all about the heads-down blitzkrieg, as the Canadians' titanium rhythmic spine navigates neck-wrenching twist after vertigo-inducing turn. Still largely concerned with high-velocity battery, the band's collective brilliance means that every drop in tempo or grim blur of blasts serves some dynamic purpose beyond mere blood 'n' thunder. The consequence is that songs like "Of Gods and Machines" and "Bottom Feeders" work perfectly as bursts of lobotomized aggro, while also harboring the hidden textural depths and countless deft tricks and quirks that have long set BENEATH THE MASSACRE apart from the majority of their peers. If you want to immerse yourself in the technical insanity that unfolds during "Treacherous" or "Flickering Light", go for it. Otherwise, just sit back and enjoy the beating. Welcome back, vicious robot overlords!