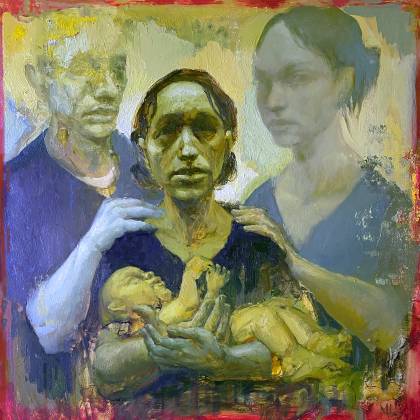 It didn't take long for PALLBEARER to perfect their masterful mix of melancholy and beauty after their 2012 debut, "Sorrow and Extinction". Heck, that mix was damn near perfect coming out of the starting gate. It's been a testament to their mastery of songcraft and melodic doom metal that even through minor tweaks here and there on subsequent records, their musical concoctions still remain emotionally and sonically powerful from the first moment a listener presses play. The overall production of their newest record, "Forgotten Days", is grungier and dirtier than their last couple of records. The record also has their catchiest and most straightforwardly metal song, as well as what may be the most goth song of their career. The fact that PALLBEARER has integrated those indulgences so seamlessly into their existing blueprint cements their status as one of this era's most vital metal acts.

The album starts out with a small bit of super-ugly distortion before the band launches into what also may be their career's purest doom-metal riffs on the album-opening title track. Everything — Devin Holt and Brett Campbell's harmonized guitars, Joseph D. Rowland's thick bass lines and Mark Lierly's drums — rains down with a body-shaking rumble. But instead of overwhelming and bludgeoning the listener with a bit of heaviness for the sake of being heavy, PALLBEARER retain their bits of beauty within the murk. The riffs have the mix of crunch and melody that have made bands like TORCHE a favorite for many heavy music fans. Campbell's lead performances on vocal duties are slowly and steadily morphing into a "Geddy Lee gone doom metal" register on every album, and when Holt and Rowland jump in with backing vocals, that performance gets an extra boost of aural beauty.

"Riverbed" and "Stasis" retain that mix of endearing melody and hypnotic trudge, but the 12-minute journey taken on "Silver Wings" is where the record truly enters wonderfully sublime territory. The ethereal feel of the track's first half washes over the listener thanks to tastefully layered harmonized vocals and the band's trademark guitar warmth. That aura flies further into the cosmos at "Silver Wings"'s halfway point with a moment of science-fiction synth and an underpinning of orchestration, before re-entering the atmosphere with a five-minute display of 2020's most beautiful melodic guitar work.

Another tell of PALLBEARER's current powers is that after soaring into the cosmos on the previous track, they embark on a crunchy stomper, "The Quicksand of Existing". This and the follow-up track, "Vengeance and Ruination", are exercises in catchy-yet-ominous SABBATH-doom accentuated by a slight foray into ZAKK WYLDE-style guitar screeches and squeals, though remaining a bit more grounded and restrained. The former track is the most accessible "rock" track of the group's career, but still rises to the business-as-usual standards already set by the band. An atmosphere of melancholy hits hard on "Rite of Passage", but the guitars hit louder to keep it from being too depressive. The record comes to a fitting conclusion with "Caledonia", an eight-minute epic that begins with the most overtly downer-goth moments of the band's career, before settling into a closing trudge that is awash with layered guitars.

It is rare for a band such as PALLBEARER to jump out of the gate as fast as they did with their debut record and a decade later to still be releasing what is the best album of their career. "Forgotten Days" gives nothing but strong indications that the band will continue to top themselves on future releases.