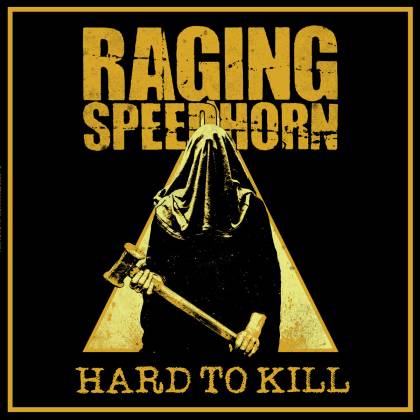 What the world needs right now is a new RAGING SPEEDHORN album. The world probably doesn't realize it yet, not least because the Corby bruisers had their greatest triumphs in the UK, but when nothing else but riffs and screaming make sense, "Hard To Kill" definitely sounds like the antidote to something. For the uninitiated, RAGING SPEEDHORN began life as a snotty, amphetamine-fueled update to the then flourishing sludge metal formula. They caused chaos wherever they went, but the music was always monstrous and undeniable. In fact, even 2007's wildly off-piste "Before the Sea Was Built" is worth a second look, but it's the band's brutal, rock 'n' roll-powered early tunes that earned them near-legendary status at home. And fittingly, as with 2016's excellent "Lost Ritual", the band's sixth studio album doesn't bother trying to be clever or pursue notions of progress, instead, this is a joyful explosion of heavy metal blood 'n' thunder, informed by MOTÖRHEAD, BLACK SABBATH, BLACK FLAG and 50 years of enormous, cranium-busting riffs.

Rampaging opener "Snakebite" hurls the gauntlet down, delivered at a breathless pace and with both vocalists — OG frontman Frank Regan and his incensed cohort Dan Cook — bellowing to an eyeball-bursting point. "Doom Machine" is just that: one-part slithering, slow-motion muscle, one-part ruinous, driving acid rock freak-out (replete with psychedelic keys). The bass tone on "Spitfire" is gnarly enough to cause a rectal prolapse, with the song itself is a haughty, lurching thing with tons of bad attitude and lyrics spat out with poisonous brio. Even better, the title track is a balls-out Motör-slammer that somehow manages to echo the all-out intensity of early SPEEDHORN gems like "Super Scud" and "The Gush" while simultaneously sounding like the best/dirtiest punk rock song you've never heard.

The second half of "Hard To Kill" sustains the almost comically furious tone of the first. "Hammer Down" is a lumbering dirge that ripples with ill intent; "Hand Of God" is a snarling burst of pure gutter metal; "Brutality" is all sledgehammer grooves and shattered teeth, before the mother of all weirdo(om) riffs kicks in; "The Best" is piss-stinking urban blues, fed through the SPEEDHORN riff-prism and wallowing in bad juju. Even a surprisingly straight cover of T. REX's immortal "Children Of The Revolution" sounds like it might jump through your speakers and force you to snort vodka. That is, after all, what made RAGING SPEEDHORN stand out in the first place. Over two decades into their reign of destruction, they appear to be more unstoppably up for it than ever.