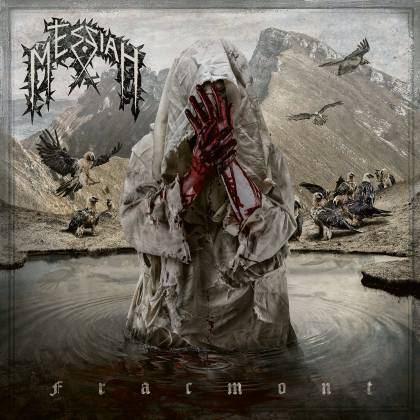 Among the earliest European bands to blur the lines between thrash and what was then a nascent death metal sound, Messiah have long been unsung heroes of the brutal underground. It doesn't help that they haven't released a new studio album since 1994, but all good things come to those that wait, even in the turbulent world of heavy metal.

"Fracmont" arrives swiftly after last month's excellent "Fatal Grotesque Symbols — Darken Universe" EP and adds a veritable fuck-ton of fuel to this veteran band's gathering firestorm. Always one of Euro thrash's most inventively nasty bands, the Swiss crew's collective sense of drama and ambition is displayed both in this album's grandiose sonic hues and in the fluid complexity of its songs.

Pitched somewhere between the raw attack of MERCILESS and early DEATH and the angular, prog-tinged detours of CORONER and MEKONG DELTA, the monumental title track slams down a gleaming gauntlet to all-comers, across nearly 10 minutes of wildly evocative, infernal thrash. Technicality and precision may be more highly prized today than they were 30 years ago, but as proficient and potent as they are as musicians, MESSIAH haven't fallen into the trap of gluing everything to a rigid rhythmic framework and trying to out-tech the competition: even at its most straightforward, on the pounding, mid-paced crunch of "Morte Al Dente", "Fracmont" offers plenty of swing, swagger and the roughest of edges.

And as much as new generations like to revise history, old-school death metal always was about memorable heavy metal songs first and foremost: these are all master classes in weaving melody through aggression, from "Urbi Et Orbi", with its knowing shades of HELLHAMMER, to the more expansive and atmospheric meanderings of "Children Of Faith" and "Throne Of Diabolic Heretics", both of which still remember to deliver a jolting dose of primitive, deathly chug along the way. The latter is particularly monumental, with a mid-song descent into viscous, caveman doom, thick with unearthly atmosphere.

Guitarist and sole surviving original member Brögi has done a superb job of honoring the past and forging a new route forward for this perennially underrated band. They're still blurring the lines between cherished subgenres and the results are still fucking killer. Here's to a second coming we can all get behind.