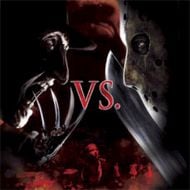 The soundtrack album is such a tired marketing ploy these days that it takes a lot for one to be truly interesting or exciting. Of course, even the term "soundtrack" is usually a misnomer: most of the songs you hear on these albums have little or nothing to do with the movie, and are frequently not heard in the film itself, except maybe for small snippets or a montage near the end credits.

I haven't seen "Freddy Vs. Jason" yet, although as a horror fanatic I can't wait. And in fact, whether the material on this CD is good or not, I hope that none of these songs are in the film, because I think rock soundtracks on horror films are the worst matchup since Fred Durst and a microphone.

That aside, a "soundtrack" album should be worth the buyer's money. That means that instead of getting repackaged oldies and tracks off albums that have been out on the market for several months already, you should at least get previously unreleased material or cuts from forthcoming albums. In that regard, "Freddy Vs. Jason" largely delivers. Fifteen of the twenty songs here are previously unheard or taken from yet-to-be-released discs, making it a boon for collectors of the individual bands. Only the last five cuts — from NOTHINGFACE, IN FLAMES, LAMB OF GOD, and TYPE O NEGATIVE, and the horrid BLANK THEORY — are already available on other discs, so we'll just skip those, although the LAMB OF GOD and TON tunes are probably the best of that batch.

Quality-wise, as with just about any other disc like this, the record is a mixed bag. The CD kicks off with ILL NINO's "How Can I Live", from their forthcoming album "Confession". It's an undeniably catchy tune that features a much more melodic sound and heavier Latin groove — probably a good indication of the direction the band is taking on the album. KILLSWITCH ENGAGE follows with "When Darkness Falls" (previously unreleased),and while I am continually impressed with the heaviness and intensity of this band, their songwriting still needs work.

One of the most interesting tunes on the album is SLIPKNOT's "Snap", which comes from the band's 1997 demos. While it's not an especially killer song, it's still solid, heavy, and worth having from the diehard fan's perspective. It also definitely shows how the band was developing and perfecting their sound before eventually signing with Roadrunner. Meanwhile, HATEBREED's "Condemned Until Rebirth" sounds like a slightly more generic version of any number of songs off their "Perseverance" album, but nevertheless features the band's requisite anthemic power.

Other standout cuts include the amazing CHIMAIRA's "Army Of Me" and POWERMAN 5000's "Bombshell", which comes off their shelved "Anyone For Doomsday?" disc and is arguably better than anything on "Transform", the album they eventually released. On the other hand, previously unreleased songs from SEVENDUST and STONE SOUR sound like what they probably are — album leftovers — while the forgettable emo of FROM AUTUMN TO ASHES and the bland, faceless "rock radio" product of SEETHER are dismissable.

Rounding things out, the album gives us the first taste of Dez Fafara's new project, DEVILDRIVER, with "Swinging The Dead". It comes across as pretty much COAL CHAMBER with different members, and the usual ridiculous growling from Grover. If you're not a COAL CHAMBER fan, DEVILDRIVER probably won't change your mind. One last rarity is "The Waste", a SEPULTURA tune recorded during the sessions for "Against" and featuring Mike Patton on lead vocals. It's a moody, musically heavy track, but I'm not a fan of Patton's post-FAITH NO MORE mumblings and he's up to the same old tricks here.

So with its all-star lineup of bands and a much-hyped movie connected to it, the "Freddy Vs. Jason" compilation still works best for individual collectors who want to own everything by a particular artist. Otherwise, it falls right in line with every other "soundtrack" disc out there.