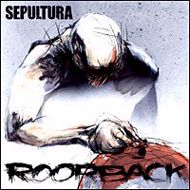 From the opening strains of "Come Back Alive" to the closing outro, "Roorback" is conclusive proof that SEPULTURA have lost a lot of their fire. The band's ninth studio album is a disappointingly large step backward from 2001's "Nation", which found singer Derrick Green meshing smoothly with the band to create an effective and, at times, even great album ("Sepulnation" is probably the group's best Green-era tune, in fact). But this time out, too many half-baked or repetitious ideas render "Roorback" sadly uninspiring and not a good sign for the band's musical future.

Ironically, Green himself sounds better than ever before on his third effort with SEPULTURA since replacing founding frontman Max Cavalera. His roar is powerful and full-bodied, and he is comfortable enough now in the lineup to try a broad range of vocal styles, throwing a little reggae influence into the mix at one point ("Urge") and attempting a more soulful style on the unusual, prog-sounding "Bottomed Out". Of course, SEPULTURA is legendary for knitting many different musical styles into their music, but this time out, instead of creating a seamless whole, the mix-and-match style often fails, leading to songs that feel incomplete.

When the band is simply pouring on the straight metal, things don't necessarily take a huge jump upward in quality. Songs like "Apes Of God" and "Leech", two of the album's best tunes, start out with strong riffs but fail to sustain memorable hooks, while "More Of The Same" and "Urge" are examples of the slow-paced, syncopated, aimless songs that have permeated the band's post-Max catalog with increasing frequency. All this is presented through a punchless Steve Evetts production that keeps things clean and clear, but strangely mutes the band's still-formidable instrumental power.

"Roorback" isn't a total loss, if only for the reliable and solid talent of the players involved. "Come Back Alive" kicks the album off in strong SEPULTURA style, spinning from a mid-paced groove to lightning speed in a half-second, while the aforementioned "Leech" captures the fury of vintage SEPS. Too frequently, however, the songs turn into meandering jams ("Godless") that don't lead to a big payoff.

With SOULFLY's most recent album, "3", meeting with an indifferent response in the States, and SEPULTURA themselves struggling to even land a U.S. record deal for the last year, neither act seems to be finding new followers nor inspiring their base of hardcore devotees (although SOULFLY has clearly fared better). And in truth, neither act's musical output — SOULFLY's excellent debut aside — has given fans much to cheer about either. After eighteen years, have Brazil's biggest rock exports started to run out of ideas, or have they simply been unable to recreate the chemistry of the glory days of albums like "Chaos AD" and "Roots"? "Roorback" doesn't provide any clearcut answers.