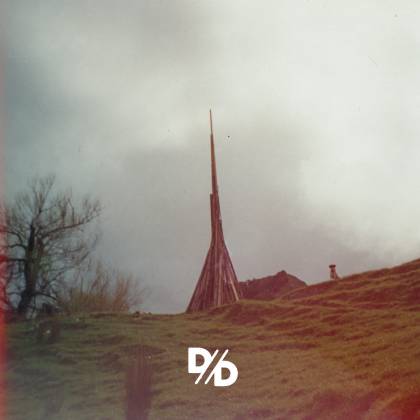 The last decade has seen so many two-piece bands emerge from the riff-driven fray that, at this point, it rarely seems like a particularly radical idea anymore. But then there's DIVIDE AND DISSOLVE, a female duo from Melbourne, Australia, with a ferocious intelligence and humanity driving their music forward, albeit at a crushing snail's pace. "Gas Lit" is the band's third album, and it's one of those extraordinary pieces of art that seems to hover majestically between genres, harnessing all manner of drone, post-rock and doom tropes and spewing them back out in a frequently beautiful but often devastating squall of hazy color.

Members Takiaya Reed and Sylvie Nehill audibly enjoy sublime chemistry throughout this all-too-brief record: it's the sound of minds meeting and sparks flying, as they wield noise, feedback and perineum-ripping bottom end as weapons of enlightenment. The band have previously stated that they aim "to observe a radical shift in the current paradigm of complacency in regards to oppressive power dynamics, genocide, racism, white supremacy, and colonization… to give weight and validation to voices that are traditionally misrepresented and criminalized before given a chance to speak." And while it would be easy to gloss over the righteous fury that drives this album and merely indulge in its sonic power instead, the self-evident truth is that DIVIDE AND DISSOLVE are making music that matters here. You can just feel it.

This is also seriously fucking heavy. Opener "Oblique" and the vicious "Prove It" are sustained onslaughts of distortion and meandering muscle; bereft of cliché and noticeably extricated from the blues, there is an almost industrial edge to their glacial forward motion. Next, "Did You Have Something To Do With It" marries poignant poetry to a gently surging synth whine before "Gas Lit"'s towering centerpiece lumbers into view. "Denial" is an extraordinary piece of music that begins in a flurry of keening violins and ghostly echo, before erupting into a warped avalanche of hyper-distorted riffs and disintegrating drums. The violins return for the glitched-out descent of the song's final coda: it's one of the most spine-tingling things you will hear this year. Later, "It's Really Complicated" comes across like MY BLOODY VALENTINE signed to hell's depths, while "Mental Gymnastics" plunges into twisted ambience, like some obscure outtake by THE RESIDENTS played underwater. In contrast, the closing "We Are Really Worried About You" is the perfect cataclysmic endgame, ultimately spiraling off into the ether and leaving nothing but jarring silence.

Whether or not you choose to engage with the deeper meanings being explored here is up to you, but DIVIDE AND DISSOLVE have the power to break you, one way or the other.