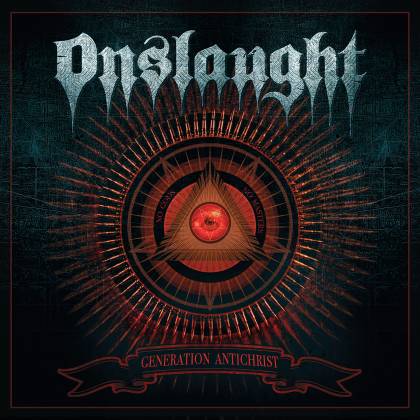 It really doesn't matter how many mainstream chatterers want metal to "move forward": subgenres as resilient as thrash will never disappear or lose their relevance, particularly when so many of its original progenitors are still releasing albums as monstrous as this. ONSLAUGHT have already amassed a near-immaculate catalogue. If you don't regularly injure yourself to 1985's "Power from Hell" or '86's "The Force", then you're simply not doing thrash (or indeed black) metal properly. Additionally, the band's post-reformation releases ("Killing Peace", "Sounds of Violence" and "VI"),have each been world-class demonstrations of timeless brutality. Even the oft-maligned "In Search Of Sanity" is a guaranteed good time, so it seems safe to say that ONSLAUGHT approach their seventh full-length with plenty of discerning metalheads willing them on. The departure of beastly, long-time vocalist Sy Keeler may have provoked a few whimpers of dread along the way, but "Generation Antichrist" dismantles any such doubts within its opening seconds, as new vocalist David Garnett announces his arrival with the kind of ferocity and charisma that can't be faked. Oh, and a voice that will slice the top of your head off.

Founder and chief riff writer Nige Rockett has always been the model of vicious consistency, but even he must be delighted with the explosiveness of his band's retooled lineup. Living up to its title, "Strike Fast Strike Hard" hammers home the ONSLAUGHT manifesto anew via a cavalcade of scything riffs, greatly enhanced by a wickedly beefy and powerful production and the jabbing blade of Garnett's feral threats. If the hairs stood up on the back of your neck when you heard the new TESTAMENT album for the first time, you can expect the same result here: whether through experience or sheer bloody-mindedness, ONSLAUGHT have never sounded more psychotically dedicated to the cause of wrecking necks.

Every song is a winner: "Empires Fall" and "All Seeing Eye" both deliver punishing, mid-paced payloads with giant, rabble-rousing choruses; "Addicted To The Smell Of Death" and "Religiousuicide" go straight for the throbbing jugular, breakneck and nasty as hell; "A Perfect Day To Die" brings everything to a violent and unrepentant close, steroidal D-beats and churning punk 'n' roll completing a spectral circle between ONSLAUGHT's gruff and grim beginnings and their self-evident mastery nearly four decades on.