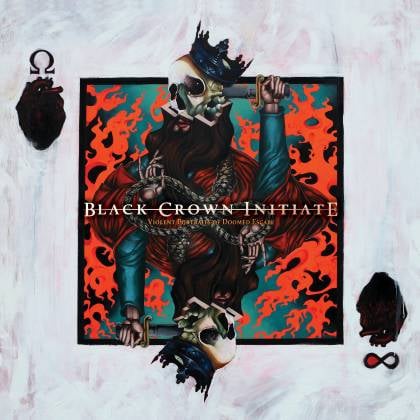 We've come a long way from the days when being remotely progressive in metal was seen as an act of extreme radicalism, but it's still quietly thrilling to see the continued rise of bands like BLACK CROWN INITIATE. The progressive death metal scene has often suffered from too weighty a debt to the first few OPETH albums, with bands falling over themselves to plug a gap Mikael Åkerfeldt was only too happy to leave behind. But this Pennsylvanian unit were always audibly smarter and more unpredictable than many of their supposed peers, and "Violent Portraits of Doomed Escape" continues the extraordinary expansion their sound has undergone since 2013's "Song of The Crippled Bull". Four years on from the immersive sprawl of "Selves We Cannot Forgive", the third BLACK CROWN INITIATE full-length showcases a band with confidence and inspiration coursing through their veins.

The opening "Invitation" offers seven minutes of revelatory moments: more robustly melodic than before, but intermittently heavier than ever, it's an epic statement of intent that augurs well for everything yet to come. Death metal is still a key component here, and if you are desperately searching for a band to scratch that "Blackwater Park" itch, then there are certainly a handful of pertinent moments to enjoy here. The truth is that BLACK CROWN INITIATE are now striding confidently down their own path — "Trauma Bonds" is a case in point. There are shades of post-rock, shoegaze and even djent buried within its maze-like structure, but the end result engages on a singular new level, as guitarist Andy Thomas's clean vocals soar and shimmer above the multifarious maelstrom. "Years In Frigid Light" is a darker and weirder affair; a storm of dissonant churn that shifts shape and gear with freewheeling abandon, but with occasional, bittersweet melodic intrusions and at least two heavy duty, euphoric hooks.

Elsewhere, preview single "Sun Of War" crams more great ideas into its 435 seconds than most so-called progressive bands could muster in a decade; volubly widescreen in intent, it flips majestically from twinkling, post-rock restraint to mutinous, syncopated grooves and may be the finest song BLACK CROWN INITIATE have written to date. Only "Holy Silence" comes close: another bewitching blend of pumped-up precision and beguiling grace, it howls with a compositional maturity that few bands, progressive or not, reach by their third album. That "Violent Portraits of Doomed Escape" also ticks every conceivable pure metal box along the way is nothing short of miraculous. If you want progress, here it is in glorious, eye-frying Technicolor.