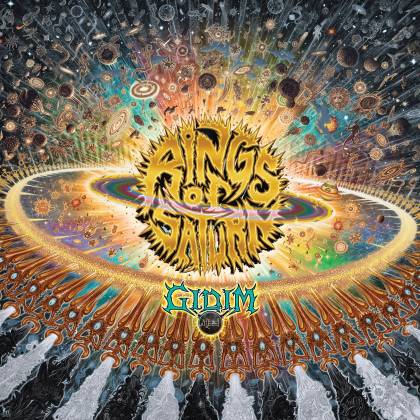 There was a time, not so long ago, when a record that sounded like "Gidim" would have caused metalhead jaws to drop across the globe. These days, levels of brutality, precision and virtuoso dexterity in extreme metal have reached utterly preposterous levels, with countless bands pursuing a similarly wildly technical and extreme course, making it far harder for RINGS OF SATURN to stand out. Or so you might think. Whether through shrewd calculation or instinctive feel, "Gidim" sees the spazzed-out deathcore extremists making a return to the deeply wonky, sci-fi death metal insanity of "Dingir" (2012) and "Lugal Ki En" (2014),as opposed to the slightly more sophisticated and straightforward tech-death of 2017's "Ulta Ulla". If you felt that the band's last album suffered from a lack of tic-inducing dissonance and willful perversity, opener "Pustules" and the genuinely dizzying "Divine Authority" will have you grinning like an idiot. "Hypodermis Glitch", which features a predictably terrifying cameo from ENTERPRISE EARTH frontman Dan Watson, is even more berserk, with countless twists and turns and a mid-song descent into blasting hell that oozes authentic malevolence; similarly, "Bloated And Stiff" wields beatdowns like spiked cudgels, veering off into crazed tech-death showboating and brief bursts of hazy ambience and proggy soloing. In (mild) contrast, "Tormented Consciousness" lays the ignorant slam riffs on thick, as guitarist Lucas Mann's endless ingenuity conjures five of the most exhilarating minutes in his band's history, replete with lashings of mutant scraped harmonic scree.

Preview single "The Husk" is arguably the closest "Gidim" gets to a more accessible, less challenging listen, but it's hard to imagine many people coming to RINGS OF SATURN expecting catchy tunes and four-to-the-floor grooves. "The Husk" has a whiff of anthemic prog-thrash pomp about it, albeit lurking between the usual bombardment of curveballs and absurd kick-drum speeds. A melody is never far away here, either: the band's secret weapon, perhaps, but a factor that makes most comparable records sound like someone firing an Uzi into a tin bucket.

Taking in its bug-eyed entirety, "Gidim" casually restores RINGS OF SATURN to their previous status as modern death metal's maddest professors. Yes, you may be able to cite countless examples of bands that play faster, harder or with more notes-per-second, but if you want to hear rampaging lunacy performed with a touch of class, Lucas Mann's crew are still imperious lords of the laboratory.