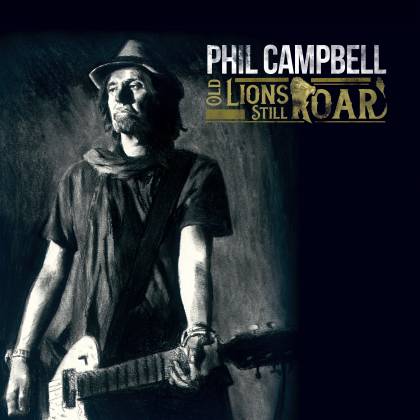 Everybody loves Phil Campbell. And so they fucking should, quite frankly. Lemmy's right-hand man for more than three decades has done more than enough to have earned the adoration and respect of millions of rock fans and metalheads, which makes his decision to power forward and to keep making great music all the more admirable.

Eighteen months on from PHIL CAMPBELL AND THE BASTARD SONS' debut album, "The Age Of Absurdity", the old legend is showcasing the other, less myopic and thunderous side of his songwriting and playing, bolstered by an all-star cast of vocalists, all of whom are audibly having a fantastic time. These things don't always produce consistently great results, of course, as albums by Slash and Mark Morton have proved to varying degrees, but "Old Lions Still Roar" is vastly more entertaining than we could reasonably expect.

It starts with the plaintive, bluesy "Rocking Chair", featuring the guitarist's Welsh compadre Leon Stanford (from THE PEOPLE THE POET),and it's a disarming curveball; all strummed acoustics and wistful melancholy. You could be forgiven for thinking that Phil Campbell has gone a bit soft in his old age, but then the rest of the album arrives, and you can almost hear Lemmy grinning from beyond the grave. Rob Halford brings class and bite to the self-explanatory "Straight Up", ORANGE GOBLIN frontman Ben Ward bellows with customary panache over the pointedly SABBATH-ian "Faith In Fire" and then Alice Cooper gate-crashes the party, sounding brilliantly snotty and arrogant on the fiery "Swing It". It all sounds like it was an absolute blast to record, but the real revelation here is that the songs are of such consistent quality, including the undeniably corny but wonderfully old school "Left For Dead", wherein SKIN singer Nev MacDonald reminds us all what a fantastic voice he always had. Elsewhere, Nick Oliveri channels his punk past through the rumbling riff-up of "Walk The Talk", DEE SNIDER eviscerates every other living rock 'n' roll vocalist for the 189th time this week on "These Old Boots", and even UGLY KID JOE frontman Whitfield Crane pulls off a bravura performance on the crunchy grunge-punk of "Dancing Dogs (Love Survives)" . Underneath it all, Campbell is blazing away like the eminently tasteful demon he always was, permanently in service to the song but as distinctive and charismatic as they come. It's only when SKINDRED's Benji Webbe lets rip on grandiose power ballad "Dead Roses" that you may forget that this is Campbell's album: Webbe is simply one of the greatest rock vocalists on the planet, and it's to the ex-MOTÖRHEAD man's credit that he has the grace to take a backseat when it counts. It's a beautiful song, beautifully sung.

"Old Lions Still Roar" ends as it began, with something delicate and restrained: "Tears From A Glass Eye", featuring Joe Satriani, is a blissfully serene piece of acoustic prettiness that speaks volumes about its creator's versatility and apparently thriving creativity. Everybody should love Phil Campbell just a little bit more after this.