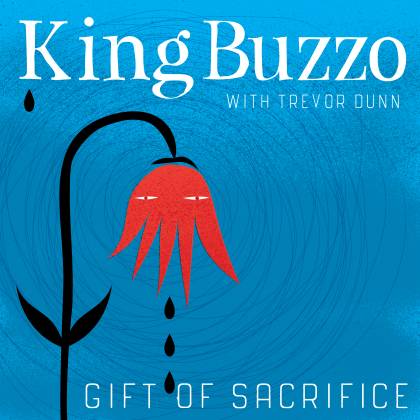 Roger 'Buzz' Osborne, aka King Buzzo, is the ringleader of the groundbreaking musical anomaly known as the MELVINS. He has established a fruitful musical relationship with bass maestro Trevor Dunn, best known for his work with the genre-hopping oddball band MR. BUNGLE. The two have shared time together in the MELVINS and as bandmates in the spastic, left-field, metallic grind project FANTOMAS. This creative union carries forth now in the form of KING BUZZO's second solo release, "Gift of Sacrifice", the long-awaited follow-up to 2014's "This Machine Kills Artists". It should be of little surprise that "Gift of Sacrifice" does, indeed, deliver the kind of bizarre, heavy music that longtime followers would hope for in the best manner possible, true to the characteristics unique to both King Buzzo and Trevor Dunn.

The album opens up with "Mental Vomit", a brief, spidery and creepy instrumental, that bleeds directly into one of the album's six-minute-plus, marathon tracks "Housing, Luxury, Energy", which begins with soft acoustic guitars and Dunn's throbbing bass pulse. The energy picks up in tandem with Buzz's signature bellowing. It's sonically sedated compared to what we've known and come to expect from our heroic rocker adorning the frizzy 'fro, but the sound is thick and spacious, encompassing a gargantuan level of emotion and passion.

"I'm Glad I Could Help Out" follows in similar fashion but with a dirty Southern feel. Buzz's vocal delivery here brings to mind a gravel-throated blues singer releasing his inner demons in a filthy dive bar. "Delayed Clarity" drives the familiar sounds forward but with a greater penchant for melody. Cutting through the playful bass and guitar lines comes a spurt of intentionally coarse violin work that quickly settles and embeds itself to the underlying melody.

The artists' inherent inclination toward the bizarre and avant-garde is of course ever-present throughout "Gift of Sacrifice". However, there is something noticeably different. Buzz's body of work typically reflects a jovial and maniacal spirit. Never before has King Buzzo sounded this heartfelt and earnest in terms of his vocal delivery. His solo project was the perfect avenue for this kind of departure. We will undoubtably be treated to much more wild work from King Buzzo under the MELVINS moniker, but for now, fans of that great band, and those of Trevor Dunn and his projects, would be wise to spend some time with this stellar effort.