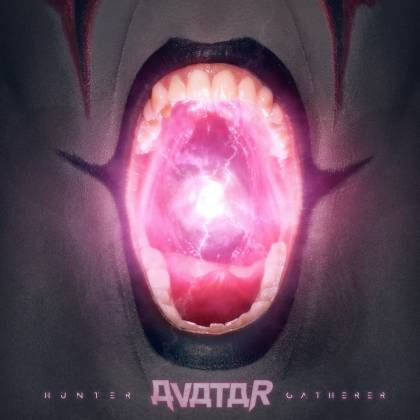 Cheerfully standing apart from the crowd and confusing the hell out of almost as many people as they delight, AVATAR are a unique proposition. They're also a fantastic heavy metal band: a fact that is often missed, largely due to the Swedes' cartoonish image and their propensity for occasionally sounding like a power metal SYSTEM OF A DOWN. Frontman Johannes Eckerström has a giant twinkle in his eyes at all times, but there's nothing frivolous or lightweight about the music on "Hunter Gatherer". As with 2018's "Avatar Country", which saw them explore more traditional metal territory while still sounding wonderfully unhinged, AVATAR's eighth album exudes the kind of confidence you get when you know you're in a class of one. Yes, there are occasional nods to alternative rock, nu-metal and grunge here, but the core of songs like furious opener "Silence in the Age of Apes" and the anthemic "Scream Until You Wake" is bold, belligerent and bombastic singalong metal, informed by modern notions of brutality but primarily focused on delivering unforgettable melodic money shots.

The strongest moments come when AVATAR stretch out a little: "A Secret Door" is a feast of skewed melodrama, with Eckerström crooning the verses and bellowing the choruses like Satan's jester. A final flurry of bait 'n' switch dynamics is simply superb, recalling FAITH NO MORE at their subversive best, but with enough underlying pomp to please any POWERWOLF fan. Similarly, "Child" is a fidgety, cinematic mini-symphony which somehow manages to sound like IRON MAIDEN and DOG FASHION DISCO simultaneously. Closer "Wormhole" is even better: a pummeling, double-kick deluge with gruesome, deathly doom riffs to match, it's easily the heaviest thing AVATAR have ever done, and yet it sparkles with multiple inspired melodic tricks and an almost QUEEN-like sense of grandeur.

If "Hunter Gatherer" lacks anything, it's an iron-plated crowd-pleaser like perennial live favorites "Hail the Apocalypse" and "Smells Like a Freakshow". But AVATAR have now evolved to a point where doing the obvious is not even a possibility, let alone a plan: there's a joy in the flagrant heaviness and post-thrash aesthetic of songs like "God of Sick Dreams" and "Gun" that makes the curious detours and wonky hooks sound entirely logical. And yes, Eckerström's personality still leaps from the speakers and slaps you around the head. There are few contemporary frontmen with a better grasp of how to sell a song, however thematically ludicrous it might be. Striking a balance between goofy showmanship and balls-out metal isn't something that anyone can pull off, but AVATAR have mastered it and are really blossoming here. Don't hate them for being more fun than your favorite band.