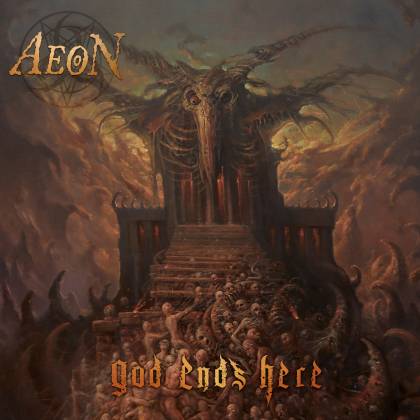 When you consider how many great death metal bands that are around today, it must have taken a degree of unwavering self-assurance for AEON to disappear for as long as they have. "God Ends Here" is the Swedish crew's first album in nine years, and connoisseurs of this stuff rejoiced when its existence was first announced, largely because AEON are one of those bands whose music has always seemed heavyweight, crafted and fueled by some grotesque, unseen power (and I can't speak for anybody else, but that's definitely what I signed up for). Even considering the length of their absence, no one sensible expects "God Ends Here" to be a disappointment, not least due to that title: now that's confidence.

In the end, this is another masterclass in how to do epic, brutal and memorable death metal properly. AEON's debt to MORBID ANGEL and VITAL REMAINS' glory days has never been in doubt, but so few bands are able to artfully conjure that sense of monumental power and haughty contempt for humanity. Hearing the mighty, grandiose roar of the Swedes' at full pelt on the opening "Liar's Den" is a simple and satisfying thrill, and one subtly enhanced by the best production job the band have ever had.

For the most part, AEON stick to the script here. Following in the footsteps of classic records like "Rise to Dominate" and "Path of Fire", "God Ends Here" ebbs and flows with a very traditional adherence to the album format. Moments of flagrant savagery and speed like "Let It Burn" and "Forsaker" are balanced out by the title track's magisterial rumble, a smattering of abstruse, atmospheric interludes and the cudgeling impact of marauding, mid-tempo cuts like "Let The Torturing Begin" and "Severed". It also builds to a noisily theatrical crescendo, with orchestral preamble "Overture: Magnum Reginae" giving way to the album's finest and most formidable moment, "Queen Of Lies": a swaggering, runaway bulldozer of a song, it crushes and crunches unstoppably forward, sonically imposing and imperious to the bitter, bloody end.

Still audibly in close contact with the dark side, AEON play death metal like it's the only thing that matters. Add your own punchline.