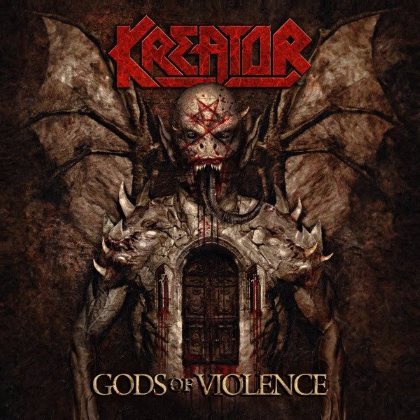 Mille Petrozza and Jürgen "Ventor" Reil continue their rambunctious march through what's become more than merely a thrash revival, and the continued presence of Christian "Speesy" Giesler and Sami Yli-Sirnio mark KREATOR's most stable lineup. It's been five years since the "Phantom Antichrist" album, and the band has released 2013's "Dying Alive" concert package and last year's "Noise Years" compilation in-between. Thus, "Gods Of Violence" comes as if the group has something to prove, to itself, not so much its audience. Like the video, you're in for it on this album, so leave your receptors open to some relatively drastic musical redirection.

For all the fast-flying chaos sparking behind "Gods Of Violence", that late 1990s desire to elevate the musicality of KREATOR's music comes a-creeping once more. In this case, it gives "Gods Of Violence"'s undeniable brutality a harmonious conscience. Most of the time, it works. Sometimes, you'll subconsciously start scratching your chin in wonder. Whether you consider Satan's role in this album — or any of KREATOR's albums, for that matter — figurative or literal, "Gods Of Violence" summons every slippery, titillating and horrific image stuffed inside the video. It's the stuff of unsettling boner provocation, yet it's also allegorical. Keep in mind the Teutonic thrash band has always taken a hard stance against governmental eradication. "Satan Is Real", as Mille screams on track three, and he's referring to political corruption as much as he is invoking evil incarnate.

The dogmatic bitch-slapping Mille huffs upon immoral global leaders throughout the fast-pounding "World War Now" isn't so much the track's story as the melodic imploring throughout the song's breakdown and bridge. Here is where the songwriting becomes improbably ornate with a soft, Victorian waft of reed instruments that tease briefly as a suggestive swan song. This before Mille and Sami Yli-Sirnio rip an incredible guitar solo on the way through to a thrash-bombed finale. "Satan Is Real" takes its time to stock up its heaviest measures in the waning seconds, dropping a contemporary metalcore methodology for most of its 4:40 running time. The cinematic overture at the end is like a metalhead's score for "Blood On Satan's Claw", but something feels slightly off by the whole endeavor, more than made up for with the blazing, though harmonious, "Totalitarian Terror".

Without the gore and nudity splashing before your eyes, it's easier to soak up the title track as a grand musical epic, since all of what KREATOR shoves before your eyes is highly distracting. Seriously, it gets to the point that you're hitting the pause button far too much in the interest of spotting a bald eagle or two amidst the boobie parade. The acoustic opening to "Gods Of Violence" is savory, and the grinding velocity is nearly as cool as the dropped-down mosh tempos that keep this song on a full pump. If you're fiddling with yourself while watching the video, you'll agree the tempo was tailor-made.

"Army Of Storms" may or may not give KREATOR fans reason to fret. By and large, it's a thrashing monster as Mille continues his accusatory tirade against tyranny. However, the melodic touches are so opposite of the mayhem surrounding them, they should come with a caveat. The reach for musicality at this point in KREATOR's music is appreciable, and at least it's hardly the blunt re-routing of "Renewal". On this album, classic power metal is KREATOR's mojo. They must've sat in on the latest RUNNING WILD recording sessions and jotted down some notes from their renowned countrymen; the strident anthem "Hail To The Hordes" could've easily been the latter's cut.

Then there's the chiming kaleidoscope tolling behind Mille's snaky rasps on the intro to "Lion With Eagle Wings", a cut that does jet off to give their Gryffin muse full flight. In an apparent nod to the NWOBHM, KREATOR plugs innumerous trad power metal grooves into "Lion With Eagle Wings". The blasting thrash behind a reserved guitar solo is appropriately majestic. If you're digging these power metal plows, then enjoy "Fallen Brother", which has barely enough evil to make it a KREATOR cut. It's one of the most straightforward, rock-driven tracks this band's ever dealt, and if this wasn't one of the most professional metal acts on the planet, it would've been a disaster. Instead, "Fallen Brother" rocks as much as it stands out from everything KREATOR's released since 2005's "Enemy Of God". "Side By Side" once more frolics in this uncapped power metal playground; it's not as effective, but pretty gnarly.

Thus, here is where we find KREATOR in 2017: the group is hitting upon a certain level of expectation from their fans where the group's music must match up to the rowdy speed of "Extreme Aggression", "Betrayer" and "Tormentor" or more recently, "Enemy Of God" and "From Blood Into Fire". This has apparently given Mille Petrozza and company reason to balk just a smidge. We shouldn't worry that the noticeable changeups to "Gods Of Violence" is veering us back to "Endorama" turf — not at this time, anyway. That jaw-dropping video seems like an insurance policy meant to blindside thrash purists and leave them ripe for what KREATOR wanted to do on this album, which is to not bore itself silly playing 120 fan-appeasing miles per hour on each song.