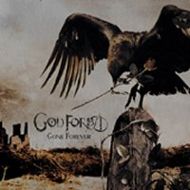 All this "new wave of American metal" stuff (as GOD FORBID's label people like to term it) is kind of the musical equivalent of a sneering tough guy discovering his feminine side. Alongside SHADOWS FALL and a few other notables, GOD FORBID have widened the remit to embellish unrelenting HATEBREED-style pit violence sounds with the layered melodic attributes of, say, MEGADETH.

Only a few years ago, they would've been laughed out of town for peeling off solos and harmonies with such poise — but kick us where it hurts if "Gone Forever" doesn't work like an album of this ilk hasn't worked before.

It's often a tall order to blend ultra-heavy techniques such as Corey Pierce's hammering double-bass drums with Byron Davis's almost crooning throat approach on "Better Days" and ensure that is doesn't come across as disjointed or patchy — but it all seems to sit pretty in there. And the same also applies to "Soul Engraved", which momentarily takes a chill pill on the snarling guitar front, before ramping it up again back to cinder-block heaviness.

Rather inevitably, as a trade-off for the sterling effort they put in elsewhere, when they do back off on the histrionics for the more conventional thrash workout of the title track, it almost sounds like half a band. And of course, consistency tends to be something of a hot potato with this genre…

But, as previously noted, "Gone Forever" works more often than not. They're a far less generic proposition than the aforementioned SHADOWS FALL, and with producer Colin Richardson going through something of an inspired renaissance at the mix desk, they may be destined to become the new crossover kings.