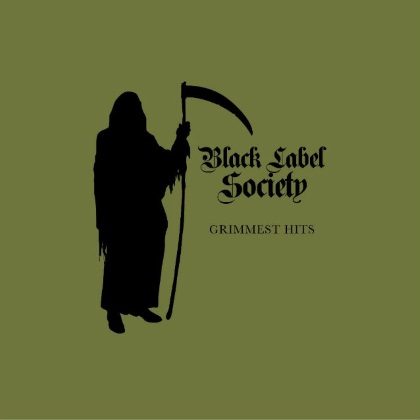 Zakk Wylde has entered a unique phase in his venerated career. Of late, he has been running about with his tribute band, ZAKK SABBATH. After dropping 2016's compelling "Book of Shadows" sequel album, Wylde is set to rejoin his patron papa bear on the road. Ozzy Osbourne, who recently completed a book-closing run with BLACK SABBATH, has announced a two-year-plotted solo career farewell tour with Zakk Wylde on lead guitar. The circle revolves fittingly as Wylde releases his latest BLACK LABEL SOCIETY album, "Grimmest Hits", one unloading a gratuitous dose of SABBATH overtures. If it was anyone else, that might be a trite, overdone prospect. This being Zakk Wylde, however, the results yield gratifying adoration.

BLACK LABEL SOCIETY smooshes doom and blues together with full salute tilted toward BLACK SABBATH on "All That Once Shined", "Disbelief", "Bury Your Sorrow", "Seasons Of Falter" and "A Love Unreal". On the latter, Wylde can't vocally emulate his good friend Ozzy enough, in cadence if not pitch. Such as it's always been.

The fugue-whispered intro to "Trampled Down Below" opens up a somber march with John DeServio's plucky bass line dishing a monster groove for Zakk Wylde to wistfully dig his vocals into, and naturally to drop a juicy guitar solo over. DeServio is nearly as much of a force as Wylde himself on this album. The moody tone carries into "Seasons Of Falter", which plods upon the backbone of Jeff Fabb's steady crashing, the solemn guitars yet compelled to create an agreeable counter melody. The up-tempo rhythm, blaring bass and scattered blues bombs on "The Betrayal" give the album a hearty shake at the right spot.

As a master rock balladeer, Zakk Wylde engineers equal winners with "The Only Words" and "The Day That Heaven Had Gone Away". Their infectious glides provide customary shades of grace amidst the pounding antagonism—"Room Of Nightmares" punching the snot out of everything in-between them. The organ behind both songs' sprawling easygoingness hums along like an admiring bystander.

Jeff Fabb leads "Illusions Of Peace" even more than Wylde with a crushing rhythm that ceases only during the breath-catching breakdown. Fabb's sweat is matched by "Illusion's of Peace"'s enormous riffs and Zakk's fiery solo. With Dario Lorina on second guitar, the bulk in this band isn't contained strictly to Wylde's shredded biceps.

"Grimmest Hits" being what it is, a partial excuse for Zakk Wylde to shower his affection for Ozzy and BLACK SABBATH to blaring effect, this open love letter will delight Wylde fans. As a BLACK LABEL SOCIETY album, it has the required elements to qualify it as thus, but the gist of "Grimmest Hits" is most concerned with keeping the Birmingham doom torch blazing eternal.