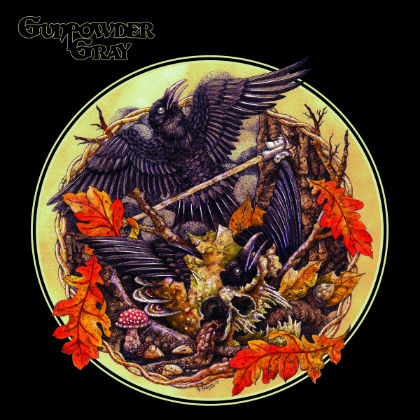 Similar to but not quite CHROME DIVISION, GUNPOWDER GRAY hits the retro sleaze rock trail for their seven-song, self-titled debut EP. With DISFIGUREMENT being housed in the Atlanta area, it's a gimme that Godbee and Besserer were able to attract Boris Records, which released a special purple vinyl edition of GUNPOWDER GRAY's EP on April 19th for the area's Record Store Day.

Godbee and Besserer teamed up with a trio of regional punk artists, Chris Heffernan (guitars and backing vocals),Sam Vaughan (bass) and Joey O'Brien (drums),but suffice it to say, GUNPOWDER GRAY has nothing to do with death grind or punk. Eighties-based hard rock restoration is what these guys are after; that, and a few backdoor tricks, if "Cummin' My Way" isn't indicative of their intent.

Most of the GUNPOWDER GRAY EP has a GUNS N' ROSES and early AEROSMITH blues rock kick to it, so much Nate Godbee tries his hand at an Axl Rose impression here. Godbee doesn't exactly hit the mark since he sounds more like Axl on the verge of laryngitis, but damn if he seems to care about any of that. Godbee is just having a ball along with his GUNPOWDER GRAY mates, rolling the tunes full-tilt with everything designed to recreate the old days of smut rock. The band best executes on "Cummin' My Way", "Outta Sight" and "Dancin' With Death".

"Dancin' With Death" is the coolest cut on the EP, riding high on its slamming intro and chorus beat. While the verses play to a shuffle-slide tempo, the punching rhythm is carried into the solo section and gives "Dancin' With Death" a killer crash that gets in and out to much satisfaction. "Cut Me Out" maintains its predecessor's heavy pant and squeezes out a greasy blues roll from Adam Besserer and Chris Heffernan.

Rolling on the relaxed bass strides of Sam Vaughan on "Saints", the guitars chuff about and fill the song's air with static glee while Godbee wails along, raising his octaves throughout the choruses agreeably though retaining that scratchy-squealed cadence on the verses.

Thus GUNPOWDER GRAY shoots to thrill and has their fill. They may or may not get as much ass as CHROME DIVISION purports themselves in their promo photos, but GUNPOWDER GRAY is at least a decent diversion from the gory mayhem of DISFIGUREMENT. Albeit, a full-on trend might not sit too well with the death metal devout.