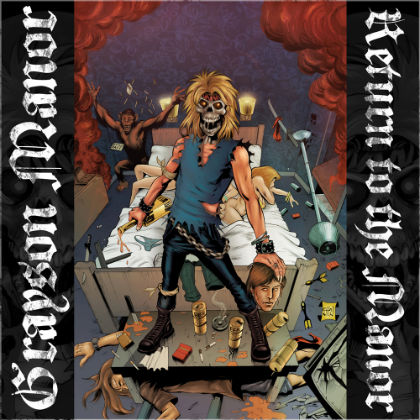 Return to the Manor

Holy throwback rock, Batman! Suffice it to say, this is hardly Wayne Manor, judging by the debauched cover of GRAYSON MANOR's new EP, "Return to the Manor".

The Atlanta-based GRAYSON MANOR have been hauling the torch for Seventies and Eighties hard rock since 2002, previously releasing their "Back On the Rock" EP and "Children of the Manor" full-length. Lead vocalist Brad Cox auditioned for VELVET REVOLVER at one point, the only unsigned singer to do so. GRAYSON MANOR has been featured on Budweiser's "True Music" show, spotlighting their SXSW performance, and there's good reason for that. Saluting the days of surefire bar and arena rock, GRAYSON MANOR is a beer retailer's potential best friend.

Whipping up three new songs for their "Return to the Manor" EP, GRAYSON MANOR kicks out a couple of struts and a heartbroken cuddle tune that all sounds convincingly replicated from the glory days of L.A.

"Shake Me" is hardly in the vein of the CINDERELLA cut of the same name, albeit GRAYSON MANOR heads straight for the hub. Their "Shake Me" rings more than a few, well, shakes like MÖTLEY CRÜE's "Dr. Feelgood" with a touch-up by the L.A. GUNS school of sleaze rock.

Have your lighters handy for "I'm Still Here". Straight out of power ballad heaven, GRAYSON MANOR rides a slow 'n steady love-lost jam with keys from Jeff Box and smooth guitar strums by Pat Valley. It's accurately replicated from the days of WARRANT and FIREHOUSE, but to GRAYSON MANOR's credit, they avoid the latter's schmaltz with this sweet little ditty. Would've guaranteed you third base at the minimum back in the day if you had it playing next to a sleeping bag for two.

"Bye Bye to Love" is the best of the EP's three tracks with its heady verses, once again reminiscent of late Eighties MÖTLEY CRÜE. The choruses have a pretty good hook, delivered by vocals from Brad Cox that stay in a comfortable high alto with only one flashed-out falsetto.

Cox has a glide to his voice that hoists the rockers confidently and he brings enough peeled-back charm on the ballad. Pat Valley handles the guitars and bass in-studio and the brother has sharp chops. Drums on the EP are shared between Rodney Beaubouef and Joe Lee. GRAYSON MANOR may be living vicariously with their music, but what they're doing is netting attention, so keep your ears peeled for these guys if you're up for some well-executed retro rock.