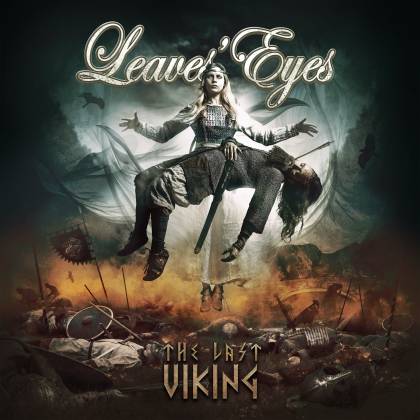 Although never quite established on the genre's top tier, LEAVES' EYES have certainly earned a formidable reputation as symphonic stalwarts. With a robust catalogue of full-length records and an international fan base, there will be plenty of people waiting for the Norwegians/Germans' new album, and the best news available is that it's very obviously one of their finest efforts to date. With vocalist ELINA SIIRALA now firmly assimilated, "The Last Viking" feels far more confident and joyously bombastic than 2018's "Sign of the Dragonhead", while also boasting a much more diverse and unpredictable array of songwriting styles.

Still tending to err on the side of death metal fury whenever possible, LEAVES' EYES have long been one of the heavier bands in this corner of the metal realm. "The Last Viking" definitely backs that up, and it's the more aggressive moments here that stand out as obvious keepers for future live shows. Anthemic opener "Chain Of The Golden Horn" and recent single "Dark Love Empress" lay out the formula with plenty of finesse: the melodies are simple but all the more memorable as a result, and the depth of layered sound underpinning it all sparkles with clarity and ultra-modern oomph. Similarly, "Serpents And Dragons" hammers home the enduring power of operatic and deathly vocals colliding over a series of startling brutal riffs. "Flames In The Sky" is so beefy and bellicose that it almost sounds like AMON AMARTH.

If there is a downside to "The Last Viking", it's that LEAVES' EYES do seem a little too beholden to the sound of symphonic metal circa 10-15 years ago. Admittedly, the majority of their most obvious peers have either moved forwards or sideways from the genre's now well-worn formula, with bands like DELAIN and BEYOND THE BLACK following WITHIN TEMPTATION's lead by ditching the fantasy vibes and embracing a pop-metal future. But this is not an album with much to offer in terms of progress, instead, it's an absolute riot for anyone that preferred symphonic metal when it wasn't so meticulously thought through.

The result is that "The Last Viking" is at its most powerful when its creators take a risk or three. The closing title track, all ten thunderous minutes of it, is easily the best thing here, and may make more casual observers wonder why LEAVES' EYES don't pursue that course more extensively. But in truth, all of those minor issues evaporate in the face of some genuinely crushing but endlessly extravagant symphonic metal, played by a band with real spirit and an intuitive grasp of what makes this stuff work. "The Last Viking" won't change your world, but it will transport you somewhere much less weakening for precisely 64 minutes.