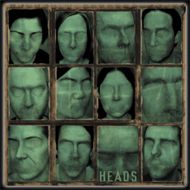 Having first been exposed to 40 GRIT's music a few years back at the height of the Bay Area MACHINE HEAD-inspired testosterone-metal movement, I was pleasantly surprised by the group's musical progression towards a more melodic and original sound on this, the quartet's full-length studio debut. Although the band have, for the most part, distanced themselves from the moshcore-style riffs that characterized their earliest offerings, there are still plenty of dowtuned, crunchy moments throughout the 11-song CD, with vocalist James Santiago sounding not a million miles removed from a younger Robert Flynn on such excellent tracks as "Serving Time" (my personal favorite) and opener "Ground Zero".

As one might expect, there are no groundbreaking musical moments to speak of, with most of 40 GRIT's songwriting revolving around huge riffs and fat grooves that have been explored countless times before by most of the genre's forerunners. Where 40 GRIT are clearly better than the rest, however, is their ability to inject dynamics and texture into their material without ever sacrificing any of the band's undeniable brutality, and songs like "Sneaky Glass Face" and "Fade Into You" ram this point home more effectively than I've heard on a debut record in quite some time.

Of course, it's still early days, and 40 GRIT have yet to develop their songwriting skills before they can even be talked about in the same breath as some of the Bay Area's finest. However, on the basis of this surprisingly powerful effort (produced impressively by Juan Urtega and Thilo Fehlinger),40 GRIT easily stand as the most promising, unashamedly straight-up metal band to have emerged from Northern California since SKINLAB.