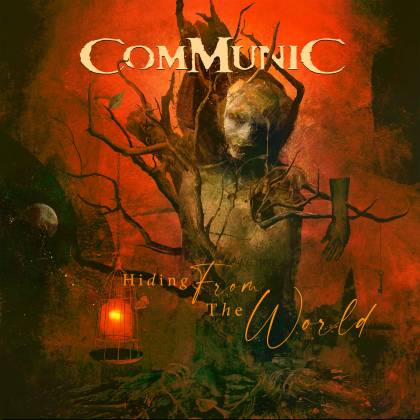 Hiding From The World

Well-respected in prog metal circles but largely under the mainstream radar, despite tenures on a couple of big labels, COMMUNIC have been one of Norway's best-kept secrets for a long time. As with the band's previous five albums, "Hiding From The World" sits squarely in that sweet spot between old-school prog metal and something darker and nastier, with guitar tones that crush and epic heavy metal overtones that occasionally edge towards doom. In truth, COMMUNIC are almost prog by default: these are bombastic, heavy metal songs at heart, and the band's inventiveness manifests itself primarily in lengthy song structures, rather than anything more groundbreaking. But the truth is that they do this stuff so well that every last riff, refrain and masterful detour oozes imperious authority. Meanwhile, frontman Oddleif Stendland's voice packs the same kind of authoritative punch that made Warrel Dane such a revered figure.

Of course, the reality is that COMMUNIC may still be preaching predominantly to the converted, regardless of how much the prog world has grown over the last decade. From the sledgehammer pomp of opener "Plunder Of Thoughts" until the ornate, glowering grandeur of the closing "Forgotten", the Norwegians' sixth full-length simply raises the bar for thunderous, dark-hued prog metal. It's still startling that COMMUNIC are a trio: the nine-minute title track is grandiose and devastating, with a level of heaviness that three people really shouldn't be able to make without cosmetic help. That it also boasts soaring melodies that will lodge in your skull for days, is testament to how much the band have matured over the years. "My Temple Of Pride" is equally stunning: darkly introspective, but dramatic and theatrical, it's like some sublime hybrid of NEVERMORE and METAL CHURCH, but sinewy with state-of-the-art sonics. In contrast, "Face In The Crowd" kicks off as a good, old-fashioned tooth-rattler, old-school metal riffs jabbing and stabbing from all directions and bursts of thrash-like intensity backing up Stendland's mighty vocal contributions. Most startling of all, "Born Without A Heart" could be the mother of all prog metal power ballads, or at least ten of the most absurdly stirring minutes of heavy music you'll hear this year. With seamless tempo shifts and the kind of intuitive groove that only a symbiotic power trio can generate, it's an object lesson in power harnessed and used for the greater musical good, with faint echoes of MAIDEN and MANOWAR providing an added frisson of authenticity. Once again, Stendland's vocal is astonishing.

After that, "Scavengers Await" maintains the brooding atmosphere, veering deftly from machine-gun battery to doomy crawl, before the majestic finale of "Forgotten" —
another monolithic but elegant ten-minute epic, rich with mortal regret and ripe with gothic menace — slams home the brilliance of COMMUNIC's latest burst of creativity.

For those who worship at the altar of prog metal, "Hiding From The World" will simply be the latest (and arguably greatest) COMMUNIC album. For those who have yet to have the pleasure, a sumptuous feast awaits.