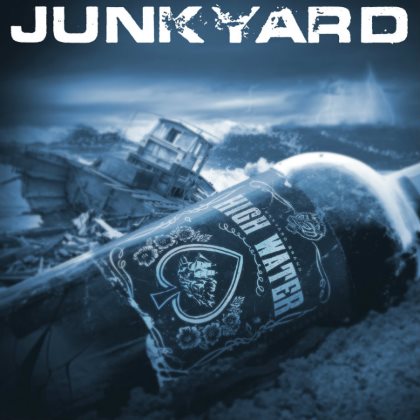 Remember when the punk community lost its shit in '89 when MINOR THREAT/DAG NASTY legend Brian Baker turned up in a blues-based piss rock band? Funny when you consider punkers were quietly harboring a love of and subsequently forced to relinquish GUNS N' ROSES to the mass rock market once Baker cropped up in JUNKYARD, to the chagrin of many.

These days, Baker only contributes to, instead of hangs fully in JUNKYARD (BAD RELIGION and DAG NASTY reunion gigs being where you'll find him more often),while David Roach and Patrick Muzingo represent the remainder of the band's original lineup. To his credit, bassist Todd Muscat's been around since 1991. Between 1992 and 2000, JUNKYARD scrapped itself, resurrecting for nostalgic runs that never really amounted to anything beyond that. Now, 26 years since its self-titled album, JUNKYARD drops new material, an 11-song jaunt through its own red times, "High Water". Not much has changed between the two records, other than crisper production and far more polish. Thus, if you know this band, you know what you're getting.

The brisk opener, "Walk Away", is a grabber with an undeniable punk bend looming behind the tough riffs, slamming rhythm and snide vocals from David Roach, who sounds in terrific form. Hearing, "That's cool, man," uttered after this take really is cool, even as the AC/DC-thumped "Faded" picks up where JUNKYARD started on its 1989 album. JUNKYARD knows its identity and rather than muck with it, they follow the same ideal KROKUS has done over the years—assuming you consider that an ideal. "Faded" and "Cut From The Same Cloth" thereafter go straight to "Powerage" and "High Voltage" with little shame. If you're cool with that, they're agreeable numbers.

The easygoing blues shuck of "Styrofoam Cup" is easy to drown inside with the up-and-down riffs creating an intentional laze alongside slow-pulled guitar solos and a pleasingly tiring bass line from Todd Muscat. "Hellbound" thereafter takes another Bon Scott -era grab, as does "Kindness to the Dead" at the tail end of the album, with ear tickling, gut-plunking fuzz and gnarly rim taps from Patrick Muzingo. Amidst the AC/DC shakes is a purposeful aural inebriation that may toy with the claustrophobic.

For JUNKYARD's fans, "High Water" is a worthwhile wait. For casual listeners, it's a respectable if frequently lewd trip down memory lane, even though a large portion of those memories belong to someone else. Then again, what hard rock band of the past three decades hasn't done its damnedest to salute AC/DC and AEROSMITH at some point in its career?