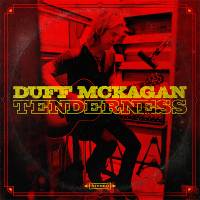 The immediate mental image most of us draw of Duff McKagan traces back 30 years. The 20-something was draped with a hairspray-stiff mane. A cigarette regularly dangled from his lips. He was — and once again is — a key member of dirty hard rock/heavy metal icons GUNS N' ROSES. He looked the part. He acted the part.

Fast forward to 2019, McKagan's once outlandish look has been replaced with one that's mature, much like his third solo album and latest creative effort: "Tenderness". The release was inspired by McKagan's experiences while touring across the world on GUNS N' ROSES' "Not in This Lifetime" tour. "Tenderness" is also regarded as the musical continuation of McKagan's 2015 autobiography, "How to Be a Man", which highlights the drastic changes in his life and pursuit of being a better man. The days of unhinged debauchery are long gone. McKagan has become a husband and father, a financial planner, and he has embraced sobriety and healthy living.

With "Tenderness", McKagan addresses serious social matters including the opioid crisis, sexual assault and the #MeToo movement, school shootings and homelessness. He also candidly addresses his own struggles and self-perceived missteps. The contribution of collaborator Shooter Jennings, whose father Waylon Jennings is one of the greatest names in country music history, simply can't be overstated. Shooter and an assembly of his own backing musicians provide the backdrop for McKagan's earnest socio-political commentary. The mood of the songs and lyrics go hand in hand. The music is mellow and adorned with likable, brooding lap-steel guitar lines, soothing fiddle work and gospel choir backups.

"Tenderness" is a convincing display of free-form country rock. On the title track, a swelling of liturgical organ elevates McKagan's soothing vocals that sometimes sound similar to that of the late great David Bowie. His pain is heartfelt and evident on "Parkland", a song that also references Charleston and the Columbine, Virginia Tech and Sandy Hook shootings. The track's slide guitars and sedative organ lines prove to be equally integral toward the composition. The proceedings are generally dreamlike, but "Chip Away" breaks from that norm as the most up-beat and quickly rolling song, surging with seventies era glam nestled within the act's country rock framework.

"Tenderness" is an emotional retrospective for McKagan, an expression that draws the line between where he was and how he's since grown as a person. Viewed through the prism of his current self, he examines the world around him with sadness. Yet there's a certain sense of hope that isn't extinguished. He may not have the answer to the world's woes, but the manner in which he creatively expresses this sounds so good and soothing.