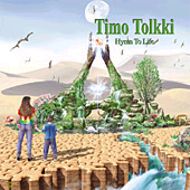 STRATOVARIUS guitarist Timo Tolkki's decision to issue a solo record that would not only contain some of the axeman's “most introspective lyrics ever”, but one that would also revolve primarily around his less-than-stellar vocals was obviously not a wise one. Having handled lead vocals in STRATOVARIUS for the group's first four releases, Tolkki is clearly aware of his vocal shortcomings (which is presumably why he handed the mic over to the much more capable Timo Kotipelto for the group's subsequent efforts),yet this wasn't sufficient to stop him from attempting to take care of the vocal duties for much of his sophomore solo effort, with predictably varied results.

In all honesty, the vocal performance is only half the problem here. Tolkkis songwriting approach on Hymn To Life, while possessing an endearingly “personal” vibe to it, focuses entirely too heavily on the “ballad-type” side of things, with the record losing steam rather quickly after the opening pair of “Key To The Universe” and “Now I Understand” (one of the album's most up-tempo cuts). In the end, the most enjoyable numbers turn out to be the ones where guest vocalists manage to inject the kind of passion and soul into the proceedings that is sadly missing from the rest of the album (i.e. “Are You The One?”, featuring WITHIN TEMPTATION's Sharon Den Adel and the aforementioned “Key To The Universe”, featuring ex-HELLOWEEN singer Michael Kiske). Elsewhere, we are left with a bunch of long-winded numbers that are simply too slow-moving to hold the listener's interest and which would otherwise benefit from the vocal input of someone with a much more powerful, soulful set of pipes than Tolkki.

STRATOVARIUS fans looking for something to tide them over until the group's next release are much more likely to find something of interest on singer Kotipelto's upcoming solo offering, which is said to be more traditional metal-tinged than this sleep-inducing effort. Hymn To Life might very well be a deeply personal album that holds a great meaning for its creator, but it is one that will ultimately have limited commercial appeal.