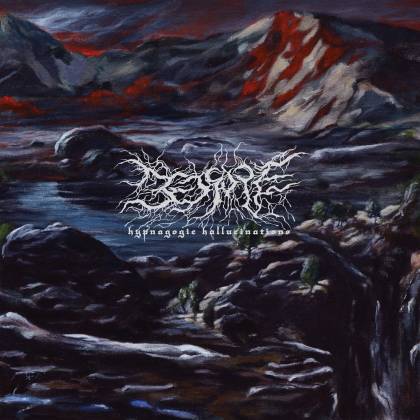 01. The Gate, Disclosure (Intro)
02. The Gate, Closure (Sarcoptes Obitus)
03. Deathgazer
04. At The Mountains Of Madness
05. Cauliflower Growth
06. Disembowelment Of The Souls (Tabanidae)
07. Brains On The Tarmac

These are strange and exciting times in the nefarious stew of death metal creativity. If you enjoyed having your brain turned into spinning gravy by recent records from BLOOD INCANTATION, VOIDCEREMONY and CRYPTIC SHIFT, then the chances are that you are way ahead of me here and already using BEDSORE's frankly extraordinary debut album as the soundtrack to your late-night lysergic escapades. Or indeed, your commute.

"Hypnagogic Hallucinations" is a wild and profoundly psychedelic death metal record. It's sonically huge, yet wickedly raw and uncompromising, with so many detours and perverse changes of mood and pace that it could easily have been an incoherent mess. But this band have their fingers plugged firmly into the inspiration matrix: just listen to the eerie, pitch-black ambience and funereal miasma of intro "The Gate, Disclosure" to be assured that this is anything but a standard assault. In fact, the first three tracks on the album are the model of succinctness, each spewing its untamed and unhinged melee of riffs and Lovecraft-ian menace within a taut four minutes. In particular, "Deathgazer" is a glorious melding of ancient death metal tropes and something else; something very fucking weird and unsettling. But it's the nine minute "At The Mountains Of Madness" that clinches the deal here. This is vicious, old-school metal in spirit, but these Italians are only dimly conscious of the rulebook and gleefully subvert every scorching blast and haunted dirge along the way. Even better is the superbly titled "Cauliflower Growth". It's six minutes of infernal churn and wayward fury, which veers from maxed-out brutality to a glitchy wander through some unnamed and thoroughly spooked-out hall of sonic mirrors. Meanwhile, "Disembowelment Of The Souls (Tabanidae)" is a simply terrifying exercise in dissonant but melodramatic doom, like early SWANS colliding with SHAPE OF DESPAIR, but with more and better drugs. The closing "Brains On The Tarmac" — which, as you might imagine, will seriously mess with your brain — is another sincerely progressive, marathon head-fuck that morphs from vexed spaghetti western vibes to all-out, hyper-swirling cataclysm and beyond, to more synapse-pulping atmospherics and a final, riff-powered fist-flurry worthy of "Rrröööaaarrr"-era VOIVOD.

Death metal exists in many forms, but it's records like "Hypnagogic Hallucinations" that are keeping the genre's restless spirit alive. More importantly, this will make your third eye spin like the "Wheel of Fortune" (as you bang your head, obviously).