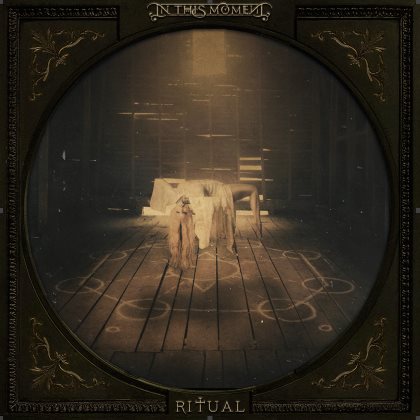 At this point, IN THIS MOMENT is unstoppable. The band may yet have HALESTORM and LACUNA COIL to contend with if supremacy over this branch of hard rock is its goal. Yet the band's newest offering, "Ritual", for all its witty pop and electronic shakes behind a perpetual theme of repent and deliverance (you be the judge if that's from Heaven or Hell),is still too inherently dark to cross over to FM. This naturally makes "Ritual" vastly superior. Let's not quibble over bragging rights between the women fronting these popular acts, but do give Maria Brink and IN THIS MOMENT the edge in having the smarts to deliver enormous, cabaret-styled pop rock, forked with Devil's tongue. If you were all over "Black Widow" last go-round, "Ritual" may juice you up even more.

The instrumental intro "Salvation" sounds like the calamitous opening theme to an evil version of "Survivor". Here the vibe turns toward sinister gospel with a bluesy kiss slavered into the stomping groove and building riffs on "Oh Lord". The track is audacious, as if spun by DEPECHE MODE and Lady Gaga, which, in reality, would present one hell of a coupling. Maria Brink summons the same self-afflicted penitence that Dave Gahan flings all over the MODE's "Songs of Faith and Devotion" and more recently on "Delta Machine". You might as well add "Personal Jesus" into the mix as Brink's been figuratively cavorting with the Devil and pleas for an equally figurative salvation—whichever harbinger representing north and south welcomes her beckoning. That answer comes later through infernal baptism, played to the same methodology with louder riffs on "River of Fire".

You're either going to smile or cringe at IN THIS MOMENT's metalled-up overhaul of Billy Idol on "Black Wedding", which finds Rob Halford checking in with Maria Brink, who yelps and screeches overtop the song's hellish burlesque. "Black Wedding" is goofy, but it is fun and, for his part, Halford sounds exuberant. As if the group hasn't already rolled the bones at much risk here, next comes an interesting cover of Phil Collins's iconic "In The Air Tonight". Though devoid of the smooth, clapping syncopation and anticipatory heat of Collins's original, Maria Brink makes an appealing alternate voice. IN THIS MOMENT slinks its version along an electro groove, updating the song for a generation that was getting its legs in the world when Collins scored big with his soundtrack for Disney's "Tarzan". The echoing coldwave and slippery guitars build toward a less-satisfying finish beyond a mecha-tribal crashing of the epochal drum roll. Even with modern technology and appreciable texture, let's face it: IN THIS MOMENT has a tough act to follow. Nonetheless, the cover is brazen enough you can all but guarantee its pickup in some future action flick, much as "Roots" is bound to haunt numerous workout playlists.

If you want to call what IN THIS MOMENT has been doing the past few albums a Gaga-ian rebirth, then at least on "Joan of Arc" it suits the group. The song carries a pumping swing and an obvious wave to the pop megastar from the hard rock trenches. It's what the lackluster mainstream—Lady Gaga being one of the rare exceptions of superpower excellence—should aspire to, along with the stealthy "Twin Flames". A triple dog dare is issued to the pop world to match one of the cleverest songs on this album, "Witching Hour", with its electro-surf groove and subtle wafts of 007-strutting guitar knocks behind Maria Brink's humid glides.

"Half God Half Devil", less motivating due to its KORN simulations, allows "No Me Importa" to get away with one by slow riding the haplessly repetitious chord patterns you hear (unless you're dulled to such banality) mandating contemporary mainstream music. Maria Brink's refreshingly honest snarls and cheeky flirts, plus attention to detail with piano and strings, dresses up the track like a slithery night on the prowl. It's why IN THIS MOMENT has successfully morphed from 2008's "The Dream", which gave signals to this moment, one where Maria Brink has become the megastar aspirant with only a tough, sales-strapped market to get in her way.