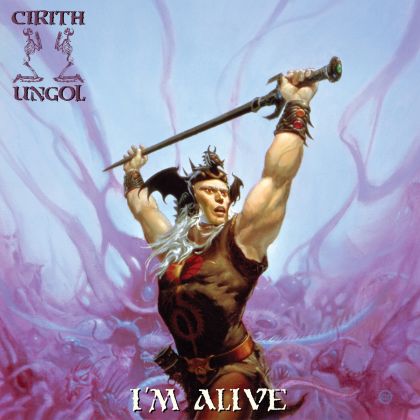 They may be far from household names, but CIRITH UNGOL are one of those bands that inspire devotion among true aficionados of the metallic arts. Formed in Ventura, California, in 1971, they reached a peak of efficacy in the early '80s, releasing two albums — "Frost and Fire" and "King of the Dead" — that are widely and rightly regarded as monumental classics. With a sound that fizzed with progressive intent, but that shrewdly foresaw the evolution of doom metal and U.S. power metal, they probably should have been much more successful first time around. Luckily, thanks to a combination of metal's in-built atavism and the rejuvenating powers of the internet, the band's long-awaited 2016 comeback was greeted with a fitting amount of hysteria.

"I'm Alive" captures CIRITH UNGOL enjoying a hero's welcome at Athens's Up The Hammers Festival in May 2017, as they power through a set of songs drawn from all four of their albums. It's rare to find a live album that justifies its asking price these days, but this one delivers the goods tenfold, not least because modern recording standards ensure that CIRITH UNGOL have never sounded heavier, sharper or better than this. As an unexpected bonus, vocalist Tim Baker seems to have grown in stature and charisma over the decades. His unique roar — never quite singing a melody, but always in control of the unfolding drama — has greater depth than before: coupled with those beefier guitar tones and a sense that this band were determined to fully honor their own legacy, it's a truly thrilling rebirth for all involved.

As for the songs themselves, there is little to argue with here. From explosive early classics like "Atom Smasher" and "Black Machine" through to proto-doom epics like "Chaos Rising" and the godly "King of the Dead", it's a near-comprehensive trawl through everything you need to know about this seminal band.

For the already converted (or, indeed, anyone else who wants to spend some money on something awesome),the two-CD/two-DVD version of this laudable release delivers an audacious bonus helping of live footage, including two more full live sets. All we need now is a full-length follow-up to last year's magnificent "Witch's Game" single. This is one epic tale that deserves to run and run.