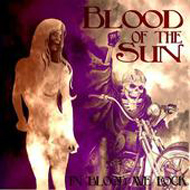 BLOOD OF THE SUN

In Blood We Rock

This is the kind of review that makes a writer feel like a real asshole. Texas retro-rockers BLOOD OF THE SUN have an amazingly good thing going on here — instrumentally, they can't be touched. Big warm analog riffs, a keyboard player that throws in just the right amount of piano and Hammond B-3 organ to get your head nodding, and a lethal rhythm section with a shuffling, loose, funky drummer that makes these songs go straight to your gut. In short, this oughta be a top ten contender at the end of the year, for sure, a real head-turner for anyone who worships at the church of the riff, be it the WOLFMOTHER branch or the KYUSS tabernacle.

So why only a 7? Well, it's gotta be said — drummer Henry Vasquez took over the vocal duties in the band when original singer Mark Zammaron (also of the very underrated LAS CRUCES) didn't work out. They tried other people, they needed to get the album done, and Vasquez ended up keeping the singer job by default. The unfortunate fact is, on album, Vasquez still has a long way to go. The vocals are multi-tracked and oddly loud in the mix, further emphasizing when he hits a sour note or does something weird. I think the production is at least partly to blame, and I think he'll get better with experience, and I also think it probably matters a lot less live. But still, it's a pretty big hurdle to get over when you're trying to enjoy the album.

It's still worth digging into, though — the seven-minute "Burnin'" conjures up wicked slabs of Iommi-an riffery before breaking down into an awesome doomy ending. "Get Yours" is a greasy-fried southern throwdown complete with cowbell and the kind of driving, organ-drenched rhythm that recalls a young and hungry DEEP PURPLE, the sort of song you listen to in the car and then realize you're doing 95 without realizing it (and the PURP thing ain't just my imagination, either, Vasquez throws in a nice sly "Perfect Strangers" nod in the middle). Closer "Road King" is an absolute monster of a jam, part "Speed King", part MYSTICK KREWE OF CLEARLIGHT, all Texas boogie-damn intensity.

Throwing in too many place references in a review is lazy journalism, but seriously, the Texas thing can't be avoided. What's with that place? AMPLIFIED HEAT, DIXIE WITCH, THE SWORD, hell, ZZ TOP…. the heat and the wide open spaces (read: batshit crazy long drives on melting asphalt) seem to make people a little bit frazzled, and give the rock and roll from down there that much more soulful, heartfelt, and a little bit manic. BLOOD OF THE SUN are a great band, and if "In Blood We Rock" happens to be a snapshot of them breaking in a new element and not quite getting there yet, it's also a testament to how righteously they rock that the record is still damn near essential anyway. Top-notch riff rock, jams the way they were meant to be kicked out. Easily a 9 with better vocals.