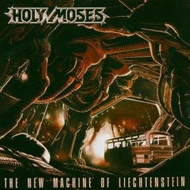 The New Machine of Liechtenstein

Sick of reading about HOLY MOSES reissues yet? Well, too fucking bad, because the smokin' banshee Sabina Classen and her band of German thrashers haven't gotten a fraction of the attention and respect they deserve yet. Getting their discography back in print, including this 1989 rager, is good news for metalheads, especially here in the USA where HOLY MOSES was little more than a name on other bands' thanks lists back in the day.

Arguably the pinnacle of HOLY MOSES's uncanny ability to think up the goofiest English titles ever, "The New Machine of Liechtenstein" came out on a major label in Europe, and their brief stay in the big leagues seems to have helped out in the budget department. The guitars are crisp and clear, the production solid and well-defined, probably the best-sounding of the band's '80s records (sure, it's a little dry sounding, but this was the era of D.D. Verni's weird overprocessed bass tone and "…And Justice For All". A lot of thing seemed like good ideas at the time).

Musically, we get plenty of simple, catchy head-down German thrash polka, with gang choruses, galloping riffing, and Classen lustily growling about nuclear war and shadowy government projects (when she yells "you are nothing but fucking machines… just a god damned… MACHIIIIIINE," it doesn't get much more fucking metal than that). The band's German metal is laced with a healthy dose of TESTAMENT-style Bay Area straightforwardness, giving the band an accessible sound even as they bring plenty of blazing speed to the table. And what's with the "Dimension: Hatross" homage at the beginning of "Panic"? It's little eccentric moments like this that make HOLY MOSES such a cool band — and their musicianship helps, too (check out the cool solo, with no rhythm guitar dubbed underneath, in "Def Con II"). They're tighter and have their shit more together than many of the Krauts did back then (these guys coulda even taught KREATOR a thing or two about keeping it together). In short, listening to "The New Machine of Liechtenstein" in 2007, you can't help but think “why didn't someone tell me about this fucking band twenty years ago??"

Add this one to your list of old-school thrash bands you need to check out. Hell, add them at the top of the list. And let these labels know, with your voice and with your cash, that you appreciate bands like HOLY MOSES being brought back from the realm of eBay scarcity and speculation, and back onto the record shelves where they've rightfully belonged all along.