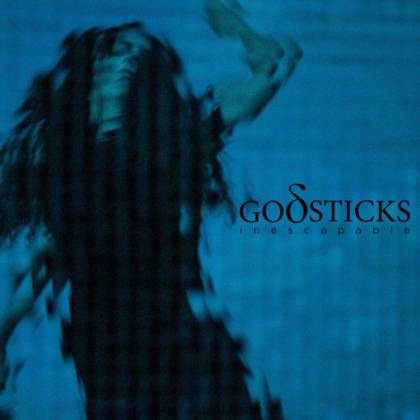 It's slightly irritating that GODSTICKS are still best described as UK prog metal's best kept secret. "Inescapable" is the Cardiff band's fifth album and, once again, it showcases both a sound and a spirit that is entirely unique in today's rather crowded progressive marketplace. More importantly, perhaps, GODSTICKS are consistently heavy and gnarly in a way that very few of their contemporaries would even contemplate. "Inescapable" is undeniably a brim with glorious melodies and moments of wonderfully intricate finesse, but it's also an album full of massive, life-affirming, spine-wrenching riffs, all hewn from dissonant churn and an almost palpable sense of angst that permeates every sinewy ensemble surge.

You may detect a hint of ALICE IN CHAINS' soulful heft lurking in "Denigrate"'s barbed refrains and at several other points, but grunge was never this interesting or so instinctively perverse. GODSTICKS also have more than a little RUSH swirling around in their DNA, but again the resemblance is fleeting and more about intent and execution than design. Instead, these songs seem to exist in a vaguely familiar but subtly warped sonic world, where the lines between brutish metal and opaque art rock have been irrevocably blurred.

As unlikely as it sounds in this age of endlessly recycled ideas, GODSTICKS are genuinely original. Even at their most accessible, as on preview single "Surrender", chords never quite fall where you might expect; frontman Darran Charles's acerbic rasp soothes and jars in equal measure and underlying grooves mutate at will. There's a delicious bitterness in Charles's lyrics too: these are dark, troubled songs that never quite reveal their emotional secrets, but it's fair to say that the vocalist has weathered some serious turmoil on the road to this studio-bound exorcism. The most pain is projected during the album's quieter moments. "Victim" is a meandering fever dream, all prolonged tension and simmering rage; "Breathe" is a shimmering mirage, fraught with terror but awash with nourishing melody.

At a generous nine-and-a-half minutes, "Change" is manifestly this record's most showy moment of prog indulgence, but it begins as an understated and languorous affair, before transforming into a mutant groove metal master class, as Charles asks, pointedly, "So what if I don't survive?" Elsewhere, those riffs keep kicking doors down and reaffirming that GODSTICKS are a balls-out metal band at heart: "Relief" is a master class in menacing chug; "Resist" is an ornate but vicious conflux of skewed prog metal tropes; and the closer, "Time", lowers the curtain via lurching discord and thrash-tinged syncopation. From first to last, Charles's voice provides the emotional glue that holds these bruised but defiant songs together. In truth, the previous four GODSTICKS albums were all killer, too, but if you've yet to take the plunge, "Inescapable" is a superb entry point and the band's most grimly exhilarating emotional splurge yet. Oh, and did I mention the riffs?