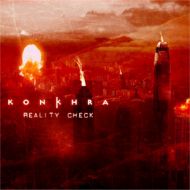 Forever the industrious bunch, you have to take your hats — sorry, bandanas — off to KONKHRA. For all their toiling, touring and unwavering self-belief, they are the perpetual nearly men who have the audacity to have once boasted such big-hitters within their ranks as one-time MACHINE HEAD drummer Chris Kontos and ex-TESTAMENT/DEATH/OBITUARY/just about everyone guitarist James Murphy. Apart from the momentary rushes of interest that these appointments caused at the time, however, it hasn't stood them in particularly good stead since Kontos decided to cry off because he didn't like the roadwork, and Murphy just ambled off into the distance as per usual.

All this is pretty much consigned to history now, but you do have to wonder when the nucleus of this Danish quartet — that being guitarist/vocalist Anders Lundemark and bassist Lars Schmidt — are going to pull another rabbit out of the hat — like a song-related one, perhaps? You see, for all their big personnel appointments, big artwork concepts ("Reality Check" features an impressive ominous burning cityscape and various "high-art" images on the sleeve) and, well, big beer-guzzling frames, KONKHRA have just never sounded as big on record. Solid, granted — but that can never be enough for a band who work so tirelessly.

"Reality Check" is their fifth full-length stab at adding a few more inches of kudos to the KONKHRA reputation, but once again it doesn't exactly prove to be jaw-droppingly essential. Insomuch as there's nothing here to sully their endeavors, nothing here really jumps up and screams "I fucking rock!" either. So, what we have are some raucous war-themed SLAYER-isms ("Warmonger"),more than a hint of MACHINE-HEAD-style pounding ("Fear Of God", "Day Of The Dog") and a sprinkling of clever bits borne of a proud band who, if anything at all, certainly don't deserve to be down in the doldrums with the bottom-feeding chugga merchants.

Yet more work to be done, then. But at least you know they won't bitch about that.