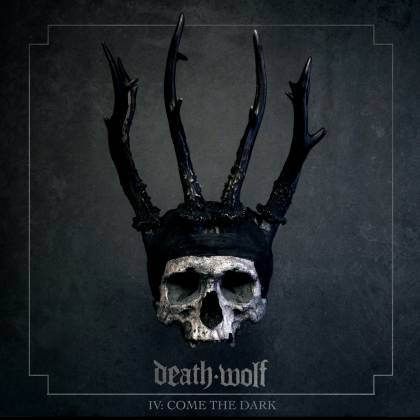 It was immediately apparent that DEATH WOLF was much more than just another self-indulgent side project. Formed by MARDUK founder, guitarist and creative driving force Morgan Håkansson, seemingly as an infernal repository for ideas deemed too straightforward, rock-influenced or gothic for the blackened mothership, this Swedish quartet sounded like a ferociously focused storm of pitch-black power on their self-titled 2011 debut and nothing much has changed since. "IV: Come The Dark" is the fourth DEATH WOLF album performed with the exact same line-up, and you can hear these musicians reveling in their shared chemistry throughout. With no need to stray from such a lethally effective formula, these are simply the sharpest and most accessible songs they have conjured to date, with a brilliantly raw and punchy production adding further weight and lashings of otherworldly menace.

Vocalist Vallentin Mellström puts in a career best performance, imbuing every hulking chorus and spine-rending riff with a sense of feverish melodrama, but also delivering the riotous heavy metal goods at the same time — for all their glowering devotion to the dark, DEATH WOLF are militant servants of rock 'n' roll, too. Songs like "Empower the Flame" and "Speak Through Fire" deserve to reach a much bigger audience than the one that Håkansson's presence will draw: this is kickass, gothic-tinged death rock with an adamantine core and a surfeit of huge hooks. Not that you won't be breathing in plenty of authentic malevolence while blasting certified anthem "The Sword" or the woozy, mournful space sludge of "Funeral Pyre", DEATH WOLF are as unforgiving as their name suggests, and phasers are permanently set to "bleak as fuck," even in the midst of a rousing chorus. "Into the Woods" is a genuinely chilling rush of overdriven Americana, with deft proggy touches and scratchy acoustic guitars, like some ghostly, sandblasted hymn from the distant past. In contrast, "Iron & Flame" is a bug-eyed rampage, like old MASTODON with a hard-on for Satan, underpinned by a brutal SABBATHian shuffle. Only the closing "Conquerors Dance" strips the fury back, before a downpour of doomy chords brings this fourth lupine assault to an emotionally grueling conclusion.

DEATH WOLF have now made four monstrous albums: "IV: Come The Dark" is easily the equal of its predecessors, and may just have the extra charm and depth required to earn this band the respect they've long deserved. DEATH WOLF rule. Just in case I hadn't made that clear.