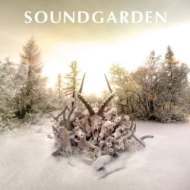 If there's one band that mostly escaped the wrath of heavy metal's original flock, one that still laments the arrival of NIRVANA and grunge despite metal's protracted return, it's SOUNDGARDEN. The primary reason for this is their evolution from a STOOGES-meets-HUSKER DU-meets-MUDHONEY mindset that wielded the flannel flag prouder than SOUNDGARDEN's chief contemporaries, PEARL JAM and, of course, NIRVANA. By the time SOUNDGARDEN reached a plateau of punk and shoegazing chicanery on 1990's "Louder Than Love", the band quickly embraced BLACK SABBATH, BLUE CHEER and URIAH HEEP. Almost overnight, they tuned down and amped up a year later on "Badmotorfinger". To Gen-X metalheads forced to watch their scene disintegrate before their eyes while PEARL JAM swirled "Evenflow" over their heads like a taunt, at least there was PANTERA, SLAYER, MEGADETH and METALLICA to cling to, and of all unlikely heroes, SOUNDGARDEN. In a subtle manner, SOUNDGARDEN was the grunge movement's expressed apology as short-lived conquerors.

It's why SOUNDGARDEN can waltz back sixteen years after their last album, the ambivalent "Down From the Upside", and post 83,000 sales in the first week of their reunion album "King Animal". Mainstream rockers can rejoice, even if they're likely to grumble there's no "Spoonman" or "Black Hole Sun" comparable here. Those who've been following SOUNDGARDEN's sonic journey all the way from 1988's "Ultramega OK" are the ones likeliest to be pleased in full by "King Animal".

In a flourishing season of reunification that reeks of cash grabbing in certain cases, there's perfect logic in SOUNDGARDEN's return, considering they were on such a roll through the nineties when they inexplicably broke up. "King Animal" sounds like penance, not just for SOUNDGARDEN's fans, but for their own wrecked cause. Chris Cornell has enjoyed an external career with AUDIOSLAVE and in a solo capacity (his Bond theme "You Know My Name" being one of the best releases in either case). Still, let's face the facts: Cornell is a gifted singer and intelligent songwriter, but everything's he done outside of SOUNDGARDEN has felt naked without Kim Thayil, Matt Cameron and Ben Shepherd at his back.

The glue is instantaneous within the first few bars of "Been Away Too Long" and the catharsis of "King Animal" comes in the middle ground of the album with the PIXIES-dashed punk grind of "Attrition". In the case of "Been Away Too Long", Cornell's maudlin lyrical grumbling sets a tone of angst that doesn't come off as contrived. Most fans are wont to agree with the declarative chorus; this band has indeed been away too long. SOUNDGARDEN makes the most of the moment as Kim Thayil lays down a Hendrix-kissed set of riffs on "Non-State Actor" and the band slips into the song's groove like it was only yesterday since "Down From the Upside". Cornell's widespread yelping at the tail end of the choruses conveys a sense of joy in recording with his old mates and as a listener, it's such a happy vibe.

The polyrhythmic jive from Matt Cameron and the ZEPPELIN-esque riff shucks on "By Crooked Steps" are enough to grab onto, but Kim Thayil's psychedelic jerk-outs beneath the huffing tempo and in the abbreviated searing solo sections are the full payoffs to the song. Listen up for a Geddy Lee-esque bass burp from Ben Shepherd in the final stanza. Afterwards, you can hear that fleeting SABBATH influence on the slow, soulful drag of "Blood On the Valley Floor".

Along the way, SOUNDGARDEN touches on the mystic psych-out trip THE BEATLES dubbed into "Tomorrow Never Knows" with "A Thousand Days Before" and they whirl a meaty impression of CROSBY, STILLS AND NASH on "Black Saturday". In other words, after a long layoff, SOUNDGARDEN has reached back to their shelves for the music that gave them verve and in turn, "King Animal" becomes a re-interpretation of the band itself. Taking just enough from "Superunknown", "Louder Than Love" and "Down From the Upside" as they need to restart their engines, SOUNDGARDEN in 2012 is cohesive, refined, mostly heavy and often translucent.

"Bones of Birds" and "Taree" are amalgams of all of those albums and there is subliminal beauty and grandeur amidst their stark crawls. The choruses and bridges of "Bones of Birds" convey desolation in changeover, but Ben Shepherd's playful bass lines beneath the overt plodding keep the song from getting too morose, while Kim Thayil's delicate top layers are just divine. "Taree" might be the closest SOUNDGARDEN gets to replicating "Black Hole Sun", but that's only hinted in the barest sense. The band's main focus is engineering threads of vintage acid and blues lines, stepped up a click.

It might've been a snarky maneuver if SOUNDGARDEN would've placed "Halfway There" more towards the center instead of the rear of the thirteen song album, but lyrically it makes sense with Chris Cornell's introspective itching. A softer ride than the rest of "King Animal", the pop-friendly "Halfway There" acts as a conscience and continued repentance for time lost amongst Cornell and his brothers. As if to proverbially say "enough of this sappy stuff," though, Kim Thayil weaves a warped lilt leading into the funk-driven "Worse Dreams" and he saves his fiercest licks for the album's last trick, "Rowing". Cornell may chant he doesn't know where he's going and he keeps on rowing, but the way Thayil erupts with more distortion-ripped improv than tempered technique (whereas technique rules a song prior on "Eyelid's Mouth"),it's his own way of venting and purging that tells us damn well where SOUNDGARDEN is going.