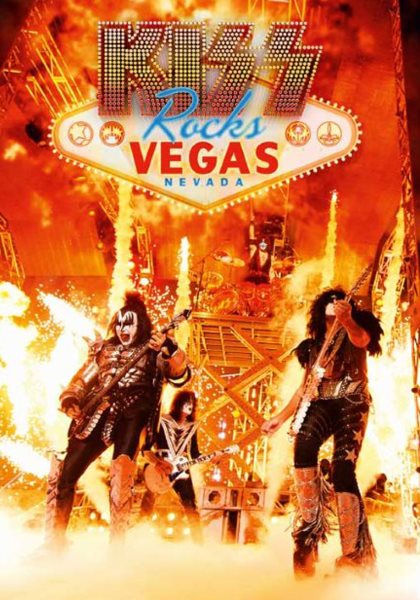 Playing Vegas for a succession of dates used to carry a stigma, perhaps because it was where Elvis Presley reeled off a legendary number of performances in the waning moments of his life and career before. A musician or band hitting Vegas for more than two gigs in one trip was frequently, if mostly in jest, considered a final destination. Things have changed, however, as Las Vegas, carrying more viva than it ever did, is one of the most popular escape attractions in the United States. Instead of going to Vegas to lay down your career, most now view Sin City as a prominent opportunity to rejuvenate it. Consider this as the Oakland Raiders appear Vegas-bound.

KISS has, of course, run through a gamut of farewell gigs. Like the SCORPIONS, however, rock 'n' roll, and the undying desire to sustain themselves both financially and intrinsically, courses through the band's blood, and nothing short of the Reaper's compulsory curtain call seems able to end this band. Not even the one-time ignominy of playing Vegas. Paul Stanley, Gene Simmons, Eric Singer and Tommy Thayer not only rebuffed the purported curse, they embraced it for a nine-show event in November 2014.

"Kiss Rocks Vegas" captures the procession of a high-stakes KISS show with the faint echoes of slot clacks and roulette wheels gyrating in its rambunctious wake. We're long past the controversial hijacking of the Cat and Spaceman personae, and it's up to you if you still indict KISS of felonious wrongdoing upon Peter Criss and Ace Frehley. Paul and Ace recently made headlines with a fences-mending duet on Frehley's latest covers album, "Origins, Vol. 1". Though the embers of past animosity were fanned via the Rock And Roll Hall of Fame induction fiasco, life goes on, possibly to everyone's future good. Frehley scored big with "Origins, Vol. 1", which included a handful of KISS reduxes. Meanwhile, the band shows no sign of quit, judging by the group's new "Kiss Rocks Vegas" DVD/CD package.

The group sputters its way to life through "Detroit Rock City" in this riff-popping concert at The Joint in the Hard Rock Hotel and Casino, and then shows a quicker spark on "Creatures of the Night", finally catching full fire on "Psycho Circus". Paul Stanley characteristically shimmies his tail off and Gene discharges his ever-liberated tongue amidst pounding pyro, glitzy neon slashes and towering jumbotron panels, which heighten the sensory onslaught. Perhaps the only thing that stands out, aside from Eric Singer and Tommy Thayer (who play their parts with reverence),is Gene plying more than usual for crowd participation. Considering a large percentage of the attendees weren't even alive during KISS's heyday, they're readily roped in, sporting the kabuki and partying like it was 1976.

KISS then strikes deadly on "Parasite", and, however you may feel about this current lineup, the group dug in hard here, delivering a monster rendition that's propelled even higher by the massive "War Machine". Tommy Thayer makes the solos his own on "War Machine", while playing Frehley true on most of the other KISS classics. Paul Stanley sweetly brings a young girl onstage, playing his guitar with her behind her back. Gene Simmons reserves "War Machine" for his fireball theatrics instead of the set-stricken "Firehouse", though the trademark siren wails escort Gene's oral combustion, which is still a marvel to behold, especially considering his age. And you can't miss his legendary, gnarly blood emissions leading off "God of Thunder".

Although KISS schmucks through "Tears Are Falling" and ambles satisfactorily through "Lick it Up", the attention given to the group's non-makeup years and "Creatures of the Night" tracks, including "I Love it Loud", is as much the attraction as the unit's dizzying stage revolutions. Being true to a larger-than-life—remember that cool cut from Side 4 of "Alive II", KISS Army?— KISS show, expect to be dazzled by center-stage rising platforms, one elevating Paul Stanley and Tommy Thayer and another one for Eric Singer. Much as ever, Gene Simmons is hoisted like a bat out of hell to pelt "God of Thunder" from on high. Paul later soars along a standing zip line to an elevated catwalk as the band rips into a fantastic haul of "Love Gun". The track is equally as impressive for its faithful vocal harmonizing. For the old-school fan, watch for the dangling disco ball that used to dip overtop KISS in the group's coming-up years. This as Paul jams above his flock on the catwalk, playfully leading them and the band into "Black Diamond". The fan-favorite rocker is capped by a convincing video depiction of Peter Criss's spectacular cat risers from the seventies, which accompanies Eric Singer's second ascension.

The reason KISS sells this show as easily as it does is not only from combined decades of professional musicianship—remember Eric Singer boasts the longest tenure on the kit in this band as he closes in on a quarter century—but that the band gives the fans, whether they're vets or newbies, a full spectacle. Highlighting the experience are images from the band's history that spool, even Vinnie Vincent in his Ankh makeup, as backdrop to "Do You Love Me". The band revs the engine during "Deuce", and, of course, the group holds back "Shout it Out Loud" and "Rock and Roll All Nite" as the wrap-up climax. It all seems so standard at face-value, but watching it done forty years in practice, well there's a reason (other than the pessimistic view of cash grab) KISS still marches on.

For this writer's purposes as a child of the seventies and one of a million-plus KISS fanatics, I've had my issues over this band's direction in recent years. What assuages my trepidation is seeing men in their elder years still going full throttle as if they arrogantly, in the right way here, defy the aging process. The acoustic session presented on the bonus features of "Kiss Rocks Vegas" truly made my heart sing. I still chuckle how this band continues to peddle sex jams over the heads of innocuous, clueless children who ogle them like gods. This includes my own son, now a self-inducted member of the KISS Army. The acoustic show KISS puts on, out of makeup and stuffed with fun classics like "Christine Sixteen", "Hard Luck Woman", "Goin' Blind", "Plaster Caster" and "Coming Home" shows the real chemistry of the Simmons-Stanley-Singer-Thayer ensemble. When the foursome turns up the juice on "Love Her All I Can", then yeah, this Criss and Frehley loyalist found himself bobbing his head and grooving his ankles, once again feeling the mojo.

There's no getting around the sour grapes feeling of ulterior motives behind KISS continuing to tour, but pushed with this much vigor, it's hard to blow a raspberry in full. Fair is fair, KISS rocked Vegas and then some.