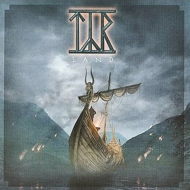 When you're the lone musical export from a country of roughly 50,000 I'd imagine there would be just a tiny bit of pressure placed on your shoulders when it comes to representing your fellow countrymen. Fortunately for the residents of the Faroe Islands, TYR takes on this distinction with triumphant pride. Embracing the ancient Norse culture that wrote the history of their homeland, TYR stands out as one of, if not, the most culturally true and traditionally faithful of Europe's Viking metal bands. Sure, their counterparts in ENSIFERUM and ELUVIETIE might offer more (head)bang for your buck when it comes to the metallic injection of Scandinavian folk music, but TYR has always struck me as a band that puts Odin first and Ozzy second.

TYR's fourth release "Land", continues the custom of recanting Faroese music of lore in a metal context, but does so with more flow and purpose than previous efforts. While I will admit to missing the frequent instrumental interludes that kept me coming back to "Ragnarok", the choir-vocal approach takes center stage on "Land" in a rather enjoyable way. I can only imagine the harmonies heard at the beginning of "Sinklars Visa" ringing out triumphantly across the Northern Atlantic so many centuries ago as a crew of Viking sailors sang out their thanks to gods for a well-fought battle, a good day of fishing or whatever the hell else they did back then. Additionally, "Land" brings an overall brighter vibe when compared that of their battle-ready brethren. Uplifting odes such as "Ocean" and "Fipan Fagra" are ripe with riffs and melodies delivered in a cheery and celebratory manner. The ambitious and epic title track, which clocks in at over sixteen minutes, is an adventurous undertaking to say the least. For as long a journey as this song is, you would think more territory would be explored, but instead the band opts for a straightforward, Viking/power metal opus. To sit through this one in its entirety, you'd have to be a true TYR loyalist. "Land" ends with a re-recording of "Hail The Hammer", which appeared on the band's 2000 demo as well as their full-length debut, "How Far To Asgard". I would venture to think that this pounding anthem to Thor is a crowd favorite. Perhaps a live rendition might have been a more appropriate choice.

Aside from their strict allegiance to the lore and melodies of their forefathers, TYR has also separated themselves from the pack by incorporating elements and energies from a wide variety of metal subgenres, and they do so without sacrificing the core of their traditional folk sound. The end result of their sewn-together diversity is one that draws a line between the rabid TYR fan and others who simply think they don't suck. Aside from a handful of standout tracks, there wasn't a lot on "Land" that grabbed me and wouldn't let go in the way other Viking bands have done. Even so, TYR still holds tightly to the torch of triumph and with "Land", that flame is growing brighter.