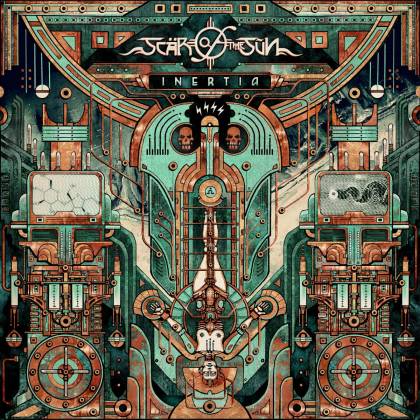 SCAR OF THE SUN

Appearances aren't necessarily deceptive. With fantastic cover art and sci-fi saluting song titles that certainly point to a band with plenty of imagination, "Inertia" gives every impression that it will be a sophisticated affair. SCAR OF THE SUN have been simmering away in the Greek underground for a few years now, and it's not hard to heard why NAPALM RECORDS snapped them up for their third full-length. On one level, this is eminently classy and well-produced melodic death metal, with gently gothic leanings. On another, "Inertia" is a subtly progressive and wonderfully colorful piece of work.

There is something hugely engaging about the way SCAR OF THE SUN have combined the melodic potency of the post-IN FLAMES set with arrangements and sonic embellishments that feel vastly more expansive. Comprising ten brilliantly succinct songs, "Inertia" is undeniably accessible, with many bombastic and highly memorable choruses, but even its most straightforward moments are elegantly layered and full of peripheral surprises.

At their most direct, SCAR OF THE SUN exhibit the same refined compositional intelligence that enabled the likes of DARK TRANQUILLITY and PARADISE LOST to shapeshift and experiment along their illustrious journeys. Both the title track and "I Am The Circle" are strident anthems, dark in spirit but bright in delivery. "Singularity Collapse" is effectively the album's power ballad, albeit one with a djent-tinged mid-section and soaring, sci-fi synths.

Elsewhere, SCAR OF THE SUN head down a conceptual rabbit hole for the three-part "Quantum Leap Zero", wherein those now expected soaring refrains are offset by flashes of futuristic electro-scree, fizzing ambience and pitiless, percussive precision. In contrast, "Zenith To Minos" is an endearingly old-fashioned, mid-paced goth metal rabble-rouser with some nicely earthy vocal harmonies and another colossal chorus. Grand finale "Anastasis" is even better: one sustained but eventful emotional crescendo, with a gloriously gruff vocal from frontman Terry Nikas, it brings "Inertia" to a close with admirable power and conviction, hurling one more insistent refrain and another shower of incisive riffs out into the ether for the sheer joy of it. Throughout it all, countless delicate details bubble to the surface, enhancing even the simplest of musical ideas in the process. SCAR OF THE SUN may not be shattering epochs here, but they've given a much-cherished sound an ingenious and quietly fascinating upgrade. Ones to watch, as they say.