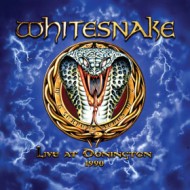 Think what you will about WHITESNAKE's movement from British blues-based hard rock band to big-haired MTV darlings, but David Coverdale's '80s success story boasted high-profile players with serious chops, as evidenced by the lineup that played the 1990 Monsters of Rock at Castle Donington festival. In addition to a rabidly enthusiastic Coverdale on vocals, that lineup consisted of bassist Rudy Sarzo of QUIET RIOT fame, guitar gods Steve Vai and Adrian Vandenberg, and great drummer Tommy Aldridge who made his name with everyone from the PAT TRAVERS BAND and OZZY OSBOURNE to TED NUGENT and GARY MOORE. That cast of stars set Donington on fire, offering hit hits galore and blistering jams.

Also available on DVD (and as a CD/DVD combo),"Live at Donnington 1990" is a double disc offering of 17 songs that were devoured by a participative crowd, captured here with a quality recording. The crowd anticipation is palpable as the keyboard wash that leads to opener "Slip of the Tongue" has thousands at fever pitch. Coverdale's exclamation to the Donington crowd of their being "a sight for sore fuckin' eyes" results in the place exploding, the front man proving to be far more intense on stage than in the studio. In addition to the expected run of hits like "Here I Go Again", "Slow An Easy" (featuring a classic guitar and vocal call-and-response segment),"Slide it In", and encore "Still of the Night", extended versions of vintage tunes pepper the set, including the 14-minute "Crying in the Rain" (with Aldridge drum solo). A splendid rendition of "Ain't No Love in the Heart of the City" had the crowd performing at the height of its collective vocal abilities. Vai shreds all over the stage, getting special spotlight attention for his solo compositions "Adagio for Strato" and "The Audience is Listening", while Vandenberg gets the tribute treatment on "The Flying Dutchman".

"Live at Donnington 1990" is mandatory for any WHITESNAKE fan; no ifs, ands, or buts about it. Even those not particularly endeared with the band must at least give credit where credit's due for a live album that truly captures the essence of a shit-hot live performance in front of an enraptured audience.