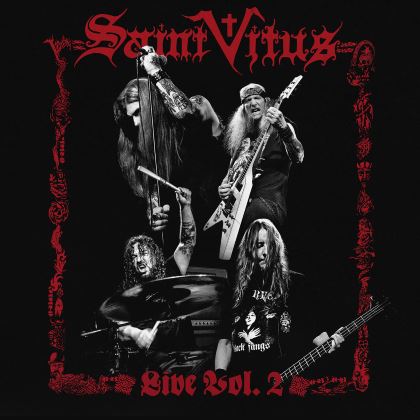 As Scott Reagers has officially rejoined doom icons SAINT VITUS for a third stint, the band releases a limited-edition sequel to their prior "Live" album, simply titled "Live Vol. 2". What do you get this time around other than a last chance to hear Scott"Wino"Weinrich front his alma mater—assuming prior history doesn't repeat itself? Well, a fair chunk divvied on "Live Vol. 2" is comprised of the same set list as "Live", the latter being recorded in 1989. So this 2016 release is a crisper presentation, but it's Dave Chandler's squawking guitar play that sells this release.

Here you have the "Lillie: F-65" lineup featuring Wino, Dave Chandler, Mark Adams andHenry Vasquez. All that's really different is better sound capture as the 2013 edition of SAINT VITUS plows through staples such as "Dying Inside" and the title track from "Born Too Late", "War is Our Destiny" and "White Stallions" from "Hallow's Victim", and "Look Behind You" from the "Thirsty and Miserable" EP. For this round, add "Thirsty and Miserable", SAINT VITUS's gnashing BLACK FLAG cover, "Patra (Petra) " from "V", "The Troll" from "Mournful Cries", plus "Let Them Fall", "The Bleeding Ground" and "The Waste of Time" from "Lillie: F-65". Suffice it to say, nothing emerges from the '84 self-titled album, "Die Healing", nor the Don Dokken-produced "C.O.D. " album featuring Christian"Chritus"Linderson on vocals.

As evidenced on "Live Vol. 2", SAINT VITUS remains one of the hardest, grubbiest and ear-gouging bands out there. Amplifiers say uncle when Dave Chandler is stroking fierce chords and straining full audile tolerance through them with his guitar solos, be it his psychedelic rips throughout "Look Behind You" or his agonizing peels on "Let Them Fall". Restraint would be a dirty word in Chandler's lexicon; even when tricking his audience with the first laidback solo on the hulking trudge of "The Bleeding Ground", expect him to shirk any chains once Henry Vasquez kicks up the thrust.

Chandler is only part of the story to "Vol. 2" as Wino diehards are going to want this for completion sake. Wino handles his business well, which leans largely upon his contributions to the SAINT VITUS legacy, albeit it's always a trip hearing him take down "War is Our Destiny" and "White Stallions" from Scott Reagers's first run. For that matter, it's a treat hearing the whole lineup tear into "White Stallions", a rowdy, chord-starved song more in the key of DISCHARGE, given "Never Again" had emerged a year prior. Considering SAINT VITUS found their primary audience through punkers, there's hardly a coincidence between the two songs.

You can't get much more fun than the preface to the "The Troll": "Some drunk guy and a hooker walk into a bar and they meet a troll!" Co-founders Dave Chandler and Mark Adams then proceed to shake the stage with juddering dirge chords born out of 1979. This before Chandler goes cosmic with a rupturing solo enough to knock the Silver Surfer off his celestial board; his wavy, screechy solo on "The Waste of Time" can test even Galactus's nerves. "Dying Inside" being the true doomer's anthem, the band effortlessly wades through its projected buzz bombs and slogging pace as Dave Chandler serves up distortion a la carte.

"Live Vol. 2" is reportedly coming out under one single pressing on CD and vinyl—grab it while you can.