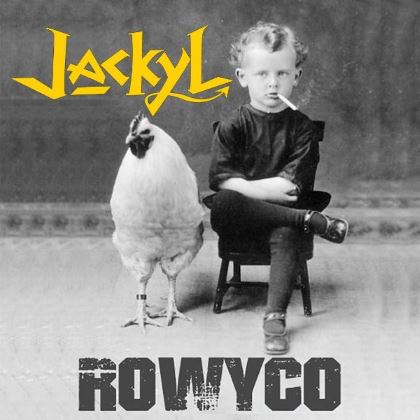 Forget the whirring chainsaws, albeit that is JACKYL's primary claim to rock 'n' roll fame, and aside from the band setting two Guinness records with their maniacal touring marathons of 100 concerts in 50 days and 21 concerts within a 24-hour block. Remember when Jesse James Dupree and the band bum-rushed a Georgia-based Kmart with a guerilla-styled concert when the chain store refused to carry JACKYL's self-titled debut? Beer-guzzling, chainsaw-wielding dogs on the cover and, of course, "She Loves My Cock" prompted the ban (even with a clean edition). JACKYL rode the rails to platinum on its first album and then gold with the next one, "Push Comes to Shove". Good times if you were Dupree and the gang.

"The Lumberjack" was both the band's defining hit as well as an insurance carrier's nightmare, like Leatherface and his posse of human chili grinders, the "saw is family" in JACKYL. "The Lumberjack"'s phallic-obsessed implications (think of Caroline Williams baiting ol' skin puss in Tobe Hooper's second "Texas Chainsaw" film) will never run its full course here, judging by the band's latest album, "ROWYCO". Wanna take a stab, pun intended, at what that's acronym for? Rock Out With Your Cock Out, ye-bang.

This is a band not only telling Osama bin Laden to kiss their derrieres on "Open Invitation", but a band so comfortable in their own naughty skins to have dropped such colorful ditties as "I Could Never Touch You Like You Do", "Rock-A-Ho", "Dirty Little Mind", "My Moonshine Kicks Your Cocaine's Ass", "The More You Hate It" and "Heaven Don't Want Me (And Hell's Afraid I'll Take Over) ". It's a wonder JACKYL ever got taken seriously enough that "Down On Me" and "When Will It Rain" became the mainstream rock hits they were in the early '90s.

Well, here are we are with "ROWYCO" and, to this band, not much has changed, as you might've gathered. They still sound more at home in a Pembroke bar than the arenas that briefly welcomed them before American hard rock and metal took a nap. They're unabashed ambassadors of redneck couture. They're still fanatical about crank superiority in an age where erectile dysfunction is a viable market (i.e. "Limpdick"). If their self-contained ASCAP publishing group, Cockster Music, Inc., doesn't tell you JACKYL take themselves and their Johnsons as seriously as a fart out of Jabba the Hutt (where such extractions release from a giant space slug is anyone's guess),then consider the knucklehead choruses of "Rally", ringing to the tune of "Rally rally rally rally, ooga chugga ooga chugga."

Parts of "ROWYCO" are downright fun, the meaty riff chunks and backend boogie groove giving "Rally" more of a kick that it probably deserved. "All Night Rodeo" is a funky party jam, that takes a page out of the old-school RED HOT CHILI PEPPERS's huckleberry book with amusing hick shtick, in this case and a greasy bass line from Roman Glick. Even a newcomer to JACKYL should damned well know what constitutes an all-night rodeo within two bars of the song.

The older Jesse James Dupree gets, the rougher his chops get and accordingly, sleazier. At least he can properly emulate his hero Brian Johnson, as "Blast Off" proves. While he takes the fore of the driving rocker "Ahead of My Time" with more gristle than ever (particularly on the swung-down bridge),he conveys pure lasciviousness on the jokey "Just Because I'm Drunk", a song that's sure to doom more than a few couples attending a JACKYL show. Picking a modern country sway for "Just Because I'm Drunk" provokes laughter long before Dupree natters "I'm hanging loose and you're wound up tight, I'm ready to fuck and you're ready to fight." While the song is immature as all hell, what Dupree and JACKYL convey on this song is no doubt the by-product of countless stage-witnessed spats.

JACKYL tackles a decent cover of HOT CHOCOLATE's funk anthem "Every 1's a Winner" before Jesse James Dupree knuckles down once again with the self-flogging "Crazy", and, of course, goes for broke in the shock factor department on "Limpdick". Too bad there's nothing to be gained these days by playing an impromptu, cocks-out protest show at strip malls since nobody's buying albums outside of CDUniverse.com anymore. Kmart can probably rest easy under their blue lights now.