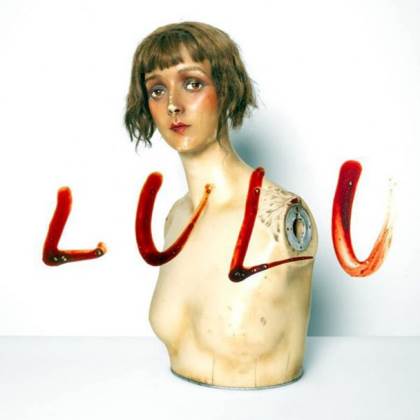 That's the only explanation one can come up with for the genesis of "Lulu", the surprise collaborative album by METALLICA and Lou Reed that first had fans scratching their heads and now, since the album surfaced online ahead of this week's release, shaking them in horror. It could have been a fascinating mix: the biggest, most powerful metal act of its generation joining creative forces with one of rock's dark urban poets and iconoclasts, whose band THE VELVET UNDERGROUND has cast an enormous influence over untold numbers of alternative, punk and avant-garde acts.

And indeed, when METALLICA and Reed jammed together at the New York concerts honoring the 25th anniversary of the Rock And Roll Hall Of Fame in 2009, there seemed to be something there. Reed (67 at the time) looked and sounded inspired, while METALLICA seemed to find a loose yet still massive groove as it rumbled behind Reed on "Sweet Jane" and "White Light/White Heat".

But all that cannot rectify the fact that "Lulu" is a catastrophic failure on almost every level, a project that could quite possibly do irreparable harm to METALLICA's career. Reed doesn't have as much to worry about, since his recent work has gone further and further into obscure, avant-garde reworkings of some of his older material and has become increasingly irrelevant to mainstream pop/rock. For METALLICA — who earned back a lot of good faith with 2008's "Death Magnetic" after fans turned their noses up at 2003's "St. Anger" — the damage could be a lot worse, and the band is bizarrely doing everything it can to help that along, as we'll discuss a little later.

The original idea — which might have worked — was to have Reed re-record a selection of his older songs with METALLICA acting more or less as his backing band. But instead, the singer came up with another venture: he wanted the band to set music to a series of lyrics/poems he'd written for a stage production based on two early 20th century plays by German Expressionist writer Frank Wedekind. The lyrics allegedly tell the story of a seductive, amoral woman who somehow ends up crossing paths with Jack the Ripper.

From the start, the album's biggest problem is that it sounds like someone took two completely disparate recordings and laid them over each other. Much of the music that METALLICA has recorded for this sounds like either unfinished jams or basic song structures (like the generic thrash of "Mistress Dread") that are a long way from the final versions that would appear on a METALLICA record (here's a question: is any of this stuff taken from the semi-legendary, abandoned Presidio sessions of 2001?). There are germs of interesting ideas here, and some earthshaking riffs do emerge from time to time, but it's hard to imagine METALLICA would put this material out as is on a proper album.

Now, imagine that someone left the tape running of this material (some 95 minutes of it) and an old man wandered in off the street and started recording his own incoherent, cracked-voice ramblings and rantings over it. That, in a nutshell, is what you get on all 10 interminable tracks found on "Lulu". On nearly every cut, Reed's wavering, emotionless, melody-free vocals undermine any potential musical power that the band can muster. With a few exceptions, the vocals and music don't sound like they belong in the same universe, let alone the same room.

The album actually starts out with a moment where one can glimpse something interesting from METALLICA: as the main riff of "Brandenburg Gate" crashes into existence, the band locks into an easy, bluesy groove as frontman James Hetfield (who delivers counterpoint vocals on several tracks) bellows "small town girl!" over and over. It's kind of fascinating to hear METALLICA play so loosely — but then Reed comes in and wipes all that away.

The most conventional track on the record, "Iced Honey", settles into a similar pocket that makes it the closest thing on here to an accessible song. On this one Reed semi-sings to the music and crafts what we suppose passes for a melody line from him these days. But "Iced Honey", while not a particularly strong song, sounds like pop genius compared to the never-ending drones of "Cheat On Me", "Pumping Blood", "Frustration" and most of the others. There are a lot of ambient passages where the fragility of Reed's voice comes out in even more stark relief, while the members of METALLICA flounder around behind him and attempt to create some sort of sonic landscape.

As far as the concept of "Lulu" itself goes, Reed's lyrics are full of references to "colored man's dick," "waste" that he wants to "eat," and wanting to marry someone who is "spermless like a girl." He threatens to "cut my legs and tits off/when I think of Boris Karloff and Kinski" in his very first lines on the record, throwing in his trademark references to other aspects of culture, but it is Hetfield himself who comes up with the greatest howler on second track "The View" by inexplicably screaming "I am the table!" (which in the song's official lyrics is actually written as "the tablet," as in a block of stone) — a line that will haunt the singer/guitarist for some time to come.

A track-by-track analysis is almost futile when each track delivers more of the same deadening, dull grind, right up to the 19-minute closer "Junior Dad". While that final exercise begins with a gentle, slowly building and almost poignant guitar theme, by the time one reaches the finish line, there's nothing but a sense of exhaustion and incredulity.

What's even more inexplicable about this whole demented affair — and which we alluded to above — is METALLICA and Reed's solid, unyielding support for this broken toy they've created. Again, we almost can't fault Reed, since this is the most high-profile project he's been involved with in years. But for METALLICA to say over and over again in interviews how proud they are, how strong this record is, and — more ominously — how it may point the way musically for the next proper METALLICA record... well, they're either delusional, feel forced to show solidarity with Reed, or trying to hide their embarrassment behind a wall of bravado.

Did anyone attempt to stop this thing in its tracks at any time? Did every single person involved in this project — from managers to producers to the guy who brings coffee to the studio — praise it enthusiastically to the faces of the members of METALLICA, even if they were hiding their distaste inside? Has no one — not even the shrewd and generally savvy Lars Ulrich — considered the confusion and anger this could cause among fans, or even paused to think, "Gee, this really doesn't sound very good, does it?"

One can argue that METALLICA is too big, too rich and too established to care what anyone thinks, and that they're in a phase of their career where they need to stretch themselves and take risks in order to keep themselves interested. All of that is, in one sense, absolutely correct. But putting this record out under the METALLICA name, when it is so clearly driven by the vision of another person entirely, is simply too far a stretch to ask from fans, especially when they're plunking down good money to buy it.

The ideal solution, perhaps, would have been to put this out as a Reed album, without METALLICA's name on it, and let the world virally/organically discover who the singer's backing band was for the sessions. That might have added a cool "surprise" or "mystery" factor to the project and perhaps even taken the sting out of how poorly conceived it is. Then again, maybe not, because "poorly conceived" may not do justice to how horrendously this has turned out. And we say this as one of the few who vigorously enjoyed and defended "St. Anger", which we still stand by. The impetus behind that album was at least there to understand; the incentive for this one is MIA.

As we said at the beginning, this might have sounded good on paper. But someone should have crumpled up that paper and thrown it away.