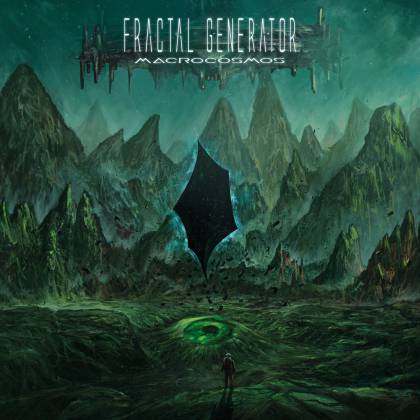 If there is one thing that the world needs a lot more of, it's Sci-Fi-themed death metal. Go with me on this one, you'll thank me for it later. FRACTAL GENERATOR self-released an astonishing debut album back in 2015: although it slid under most folk's radars, "Apotheosynthesis" heralded the arrival of a unique new death metal force, with vast amounts of imagination and wonkier, genre-bending ideas than seemed strictly fair. Five years on, "Macrocosmos" delivers another jarring, pan-dimensional whirlwind of brutality, which once again proclaims its creators to be, if I may, a bit fucking special.

There is no doubting FRACTAL GENERATOR's prowess as a death metal band. This second outpouring of futuristic savagery is noticeably darker and more claustrophobic than its predecessor, but with even more groove and a heightened sense of dynamic drama. The real key to the Canadians' power lies in their subtle but incisive use of synthesizers, electronic effects and other heavily treated but unmistakable nods to Sci-Fi's sonic vocabulary. Where some bands would gleefully plaster everything with knowing references to vaguely left-field pop culture, FRACTAL GENERATOR's approach is to harness the existential disquiet that lurks behind most gripping, Sci-Fi yarns, and to use it to underpin every riff and anguished growl.

Superficially, there are echoes of AEON here, and maybe even a hint of WORMED's horrified prescience, but this band are audibly incapable of conforming to the rules of any previously known sub-strain of death metal. Instead, songs like the opening title track offer a new, mutant hybrid, with everything from industrial precision to ageless MORBID ANGEL churn erupting simultaneously. There are hooks here, too, albeit primitive, scabrous things that act as entry points into the next crushing, atonal onslaught. "Serpentine" is a perfect example of the FRACTAL GENERATOR formula: sledgehammer blasts and feral, old-school bellowing are only half the story. The warped tempo shifts and spiky, synth interjections that underpin all that refined aggression play an equal part.

Among many fine, ferocious moments, "Shadow Of Infinity" is the obvious standout, as its creators exert maximum muscle at a stately, snail's pace, before blasting off into kaleidoscopic oblivion like THE MONOLITH DEATHCULT without the jokes. With a sudden burst of glitching electronics whipping the rug away halfway through, it's an audacious piece of extreme metal art, executed with undisguised glee.

Fans of straightforward death metal will be more than satisfied with everything that FRACTAL GENERATOR do on "Macrocosmos", but these clever bastards are subverting the system from the inside, even as they deliver some of the tastiest death metal goods you'll hear this side of the digital Apocalypse.