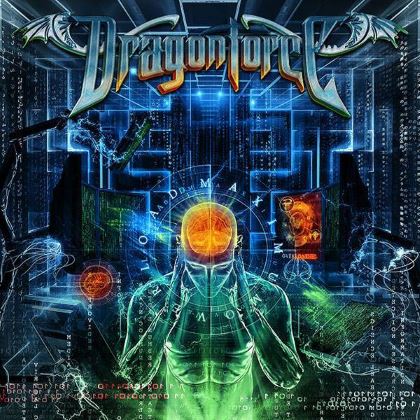 DRAGONFORCE is a band you either appreciate or you don't. It's a fact. Normally a band bearing such insane talent would rule the world, though no one will ever deny DRAGONFORCE is lacking a substantial audience. They're one of the fastest, most precise bands out there, but they have their share of haters as supporters and opinions for either side will hardly change with the band's latest album, "Maximum Overload". The need for speed is ever the credo in DRAGONFORCE, and there's tons of it on "Maximum Overload", along with three barely-there cameos by TRIVIUM's Matt Heafy.

"The Game" kicks the album into gear in the manner DRAGONFORCE fans would expect: blazing tempos, mondo shredding and inhumanly wild solos from Herman Li and Sam Totman. In other words, maximum overload. Overtop is Marc Hudson's pinpointed singing that as ever, drifts instead of tries to match the instrumental velocity. Matt Heafy's raging contributions are subtle at best. Dig them or not, though, DRAGONFORCE's understated talent is Hudson's capacity to free-float with cadence amidst the grinding chaos around him. "The Game" is intended to send a positive message of standing tall against adversity, albeit the line "same thing, different day" is ironic, given however you interpret it.

"Tomorrow's Kings" opens with a spacey synth dragged out of a Seventies schlock film before kicking the thrusters back on. More upbeat lyrics about self-empowerment are pulled through Marc Hudson's falsettos, Frédéric Leclercq's manic bass lines and, naturally, loads of ripping guitar and keyboard solos, i.e. typical DRAGONFORCE. At least the supple backing choral section on "Tomorrow's Kings" is a pleasing touch. "No More" changes nothing except the central melody and vocal shifts toward slightly lower octaves, plus some gang shout supplements. Matt Heafy, yeah, he's there if you listen hard for him.

The slower overture of the six minute "Three Hammers" is a much-needed interjection to the breaking speed as DRAGONFORCE engineers a pop-flavored take on a MANOWAR battle hymn. Of course, you can expect the song to pick up speed for a spell since these guys can't help themselves, as Herman Li and Sam Totman screech like sonic bees in accordance. Afterwards, the sprinkling harpsichord opening and dotting the brisk, neoclassical rushes of "Symphony of the Night" is a sweet touch to what rolls out as another melodic salvo. The detailed instrumentation and rustling scales on the verses create some of the most breathtaking sections on the entire album. A battering mid-tempo transition offers another brief respite, giving the listener a chance to savor the slinging guitar palettes before "Symphony of the Night" rockets off again.

The power anthem "The Sun is Dead" finds DRAGONFORCE finally pulling the reins back in full with only random speed bursts to an otherwise low-key (for these guys, anyway) affair that generates a first-class instrumental prog sequence. Afterwards, "Defenders" unapologetically jettisons again with the third of Matt Heafy's contributions (once more understated as part of the chorus lead-ins) and at least bearing some rocked-out bridge plugs.

Laces of video game-esque dickering in the midst of "Extraction Zone" are surprisingly effective despite their goofiness. Again, DRAGONFORCE pulls the velocity back just enough to commandeer a sharp prog sequence behind the playful guitar solos and it should be noted that Marc Hudson picks up his pace and chants along with giddy rapidity. Then you get a thrashing cover of Johnny Cash's "Ring of Fire". It's a bit annoying, frankly, though Cash himself was ever a progressive-minded man in life that he'd likely find favor with this ridiculous overhaul of his work.

The special edition of "Maximum Overload" comes with five bonus tracks, two being slower anthems. "Power and the Glory" hangs back in a more decorative SAXON stride and "You're Not Alone" is the closest thing to a true ballad as you'll pull from these guys. "Galactic Astro Domination" is an abbreviated instrumental speedfest first recorded for a Capital One Internet ad. What's in your wallet, indeed?

DRAGONFORCE has one of the most gifted set of players you could want in any band. Herman Li and Sam Totman are unquestionably one of the finest duos the metal genre's yielded in its vast history. Li reportedly had his dog pick from three potential solos for "Three Hammers", based upon her pleasurable facial response. That's taking guitar playing to a whole new dimension.

The difference between this album and DRAGONFORCE's breakout third record, "Inhuman Rampage", is a deeper finesse of already tremendous acumen, but otherwise, the name of the game is the same in this act. You have to be absolute junkies to hang with DRAGONFORCE for more than a few songs. This is one of the most dominant bands on the planet, but what was once curiously fascinating now has its limitations, largely due to these guys having played the same hand, round after round through six albums.