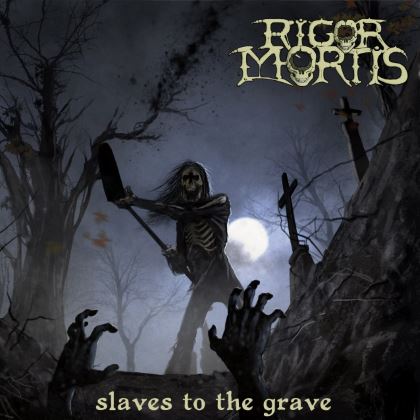 Slaves to the Grave

Ingratiating enough to suffer the loss of a brother after pulling off what should be looked upon as a career-defining record twenty-three years after their last one. The tragic loss of guitarist Mike Scaccia was made more palpable in the fact no label would touch thrash legends RIGOR MORTIS' fourth and final album, "Slaves to the Grave". Current economics and investment return concerns being the operative reasons for rejection, RIGOR MORTIS raised their own funds to honor Scaccia and we're to thank each and every donor for making it happen. "Slaves to the Grave" is a raw but definitive closing statement any thrash band would sell their souls to call their own.

A lot of why "Slaves to the Grave" is so impressive is Mike Scaccia himself, who couldn't have played better on this album. However, RIGOR MORTIS as a band put a ton of thought and energy into their songwriting for "Slaves to the Grave", to the point they concocted three progressive monsters amidst the rest of the dexterous mayhem. This album flogs and flails with zero tolerance for wimping out, but when RIGOR MORTIS gets more expansive in their arrangements, it's even more remarkable.

"Poltergeist" shows a lot of guts by launching the album with a 6:11 running time. Most bands would hardly risk dicing thrash and prog in their opening number. Yet RIGOR MORTIS are having their final say with "Slaves to the Grave" and they have plenty to impart via the winding progressions that halt the blaring speed of "Poltergeist". Fortunately, the minutes of slower instrumentation comprising the second half of "Poltergeist" are emotive and hardly boring.

"Rain of Ruin" is a thrashing gem though it's somewhat disarming that Bruce Corbitt's woofing inadvertently haunts a bit too close to Dave "Oderus Urungus" Brockie of GWAR, also recently lost to the music world. This is no fault of Corbitt, of course, and "Rain of Ruin" at least shreds the hell out of everything in sight. Mike Scaccia's solo leaves scars and there's no time to examine the bloody marks once "Flesh for Flies" belts even faster. It's more of a shame RIGOR MORTIS were dealt the bad hand they were given by Mike Scaccia's death. He and the band are at the height of their powers on "Flesh for Flies", a song that out-thrashes damned near anything today. Scaccia's extensive soloing here is so massive one has to respectfully bow a head in memory with both horns raised.

"The Infected" is likewise spectacular with its delicate, fret-frolicking intro melody served over the song's moshing tempo. As with "Rain of Ruin" and "Flesh for Flies", "The Infected" stays inside its primary rhythm once Bruce Corbitt picks up on the mic. Casey Orr and Harden Harrison give Mike Scaccia all the bottom-plugging platform he needs to split the band's sound space at the seams.

Dispensing with the over-and-done-with methodology of the preceding three tracks, RIGOR MORTIS once more noodles about with the 6:46 "Blood Bath" and later, "Ludus Magnus". "Blood Bath" bangs away with mostly straightforward thrash clouts outside of quickly-divvied darts and a ripping solo that introduces more alterations to the crashing pace. "Blood Bath" scales back to a pit slammer but loses not a lick of intensity, even as it gradually dwindles to a slog. If anything, the slower successions of "Blood Bath" allows Mike Scaccia to tear everything apart in a long guttural, solo that sadly, must be considered his swan song.

Harden Harrison's clouting punk grout that propels the grimy riffs of "Ancient Horror" puts the song, along with Bruce Corbitt's hard yapping into GWAR territory with a subliminal STOOGES twist, while staying metal as all-hell. Then "Fragrance of Corpse" jumps right back into classic thrash mode, and fragrant is the operative word as the guitar and bass melodies carry an unexpectedly aromatic cadence on the verses. It's brilliant stuff, as is the tenacious ferocity of "Curse of the Draugr", which matches "Flesh for Flies" in velocity and outstanding concord. Once again, Mike Scaccia pours audile lava over his band mates, who never waver beneath him.

The elaborate instrumentation on "Sacramentum Gladitorium", lead by Mike Scaccia's enthralling acoustic placidity and countering electric climaxes are so good they sting. To say he puts his soul into this number isn't doing him any kind of justice. The abrupt cut-off at the end of "Sacramentum Gladitorium" is not only a sign of RIGOR MORTIS' confidence, it's the exquisite build-up to the 9:49 bookending crunk epic, "Ludus Magnus", another number that could've belonged to GWAR as much as these guys.

It's unfair we're not allowed to celebrate "Slaves to the Grave" as a thrash comeback for the modern metal age. What RIGOR MORTIS put into this album is beyond many of their peers, who have already come and gone or are barely hanging about. The passing of Mike Scaccia is a morose afterthought to an album this inspired, one that deserved to be nurtured on the road, even though the surviving members will be performing random sets of RIGOR MORTIS numbers under the pseudonym WIZARDS OF GORE in the near future. Life sometimes sucks, but "Slaves to the Grave" is the exact opposite. It's a humbling though rambunctious finale for a revered thrash act that deserved more than they were given.