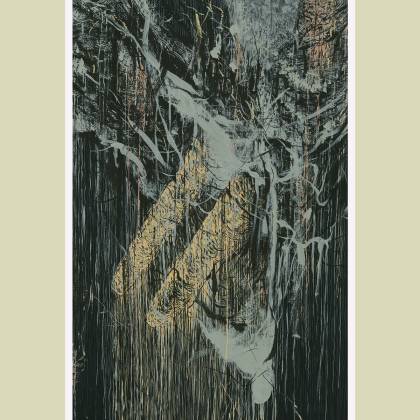 May You Be Held

The gradual progression of Boston post-metal giants ISIS from competent NEUROSIS clones with potential to an ambitiously heady prog-metal machine was one of the more enthralling musical developments of the new millennium's first decade. Band members have continued to pursue musical endeavors since that band's 2010 dissolution, with the most satisfying of the splinter projects so far being SUMAC. Since guitarist/vocalist Aaron Turner joined forces with bassist Brian Cook (RUSSIAN CIRCLES, BOTCH) and drummer Nick Yacyshyn (BAPTISTS) in 2014, SUMAC has seemingly gone in an intentionally opposite direction from where ISIS had been heading. While the former band had become experts at juggling quieter moments of musical exploration with the heavy riffs that formed their initial blueprint, the latter has become masters of delivering their din with raw caustic brute force. SUMAC's newest record, "May You Be Held", has moments of musically minimalist breathing room peppered throughout its runtime, but those moments are a mere calm before the storm, as the trio continues to perfect their onslaught of bludgeoning sludge.

The album does begin on a deceptively quieter note. "A Prayer for Your Path" spends the majority of its five minutes bending guitar notes that mostly stand solitary, though Turner does come in with an occasional tortured scream, as if he were a specter warning of hauntings to come. The note bending ends abruptly, leading into the album's title track, a twenty-minute downpour of heaviness that is an exhaustive journey but ends up being one of the most satisfying pieces of heavy music this year. The word thunderous is a bit overused in music criticism, but that honestly is the best word to describe the proceedings here. On guitar duties, Turner alternates between a pummeling display of repetitive stutter riffs and feedback-drenched noise, before locking back into a solid post-doom groove for the song's closing stretch. He punctuates this sonic discord with raspy howls and ghastly growls, while Cook and Yacyshyn also do their fair share of heavy lifting, the latter especially so with whirlwind drumming freak-outs throughout the track. When the track gets a bit more dizzying, the cacophony hits like a tornado. When the track slows down and digs deep into the sludge, it's somehow even more corrosive.

The distorted hybrid of jazz and noise contained on "The Iron Chair" feels like a rest period after what came before it, even at an eight-minute runtime. More minimalist riffs make up "Consumed"'s opening minutes, but that gives way quickly to pounding repetition from Cook and Yacyshyn and more harsh screams from Turner. From there the pace gradually increases to headier waters, with the sixteen-minute journey ending with psychedelic-prog madness from the KING CRIMSON playbook. And much as sonic minimalism started this trip, one more display of that quieter mood brings the album to a cathartic close on "Laughter and Silence".

SUMAC's latest record may have the most extreme sonic ebbs and flows of their discography so far. But those quieter moments only serve to set an ominous tone for the trio's most powerful display of suffocating heaviness to date.