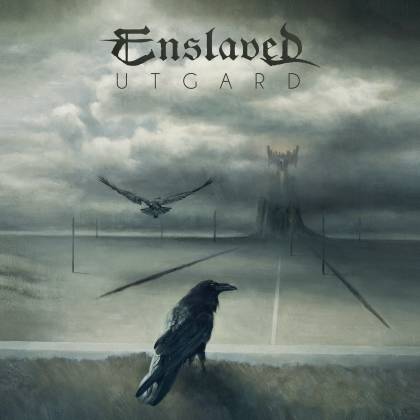 ENSLAVED's journey into prog-fueled musical madness has been an incredibly fun evolution to witness. The remaining vestiges of their more blistering black metal days become more and more of a distant memory with every subsequent album, but it is a testament to the group's creativity — and their ability to still tastefully layer in the few moments of harshness that do remain — that the backlash typically caused by such progressions has remained relatively muted. The title of their latest record, "Utgard", is a reference to a land that existed in Norse mythology. The journey taken by the Norwegian metal masters is suitably wondrous. "Utgard" feels like the true culmination of ENSLAVED's ascendancy to the throne of modern prog-metal wizardry.

ENSLAVED has consistently avoided the pitfalls sunk into by other bands making similar musical journeys by continually striving for a chaotic aura of otherworldly wonder, and never falling into a lazy comfort zone. That quest to provide continuous stimulation is launched early on here with "Fires In The Dark", as early choral chanting and acoustic-folk guitar give way to a sense of suffocating chaos, and the clean vocals provided by keyboardist Håkon Vinje and new drummer Iver Sandøy evolve into a ritual-like siren call amid busier chord progressions. Bassist Grutle Kjellson still has plenty of opportunities to emit his trademark growls, but in "Utgard"'s musical environment, his barks sound like aural transmissions from an ethereal space god. "Jettegryta" begins with the band raining down apocalyptic riffs in what may be the most purely black metal moment of the record, though with the layers of atmosphere and back-half moments of jazzier musical exploration, cosmic black metal fans will be the ones finding the most satisfaction out of those heavier endeavors. The band then indulges in a beautiful collage of clean vocals on "Sequence", but even then it's embedded within a dizzying whirlwind of crunchy rhythm riffs and space shred from guitarists Arve Isdal and Ivar Bjørnson.

ENSLAVED has shown to be adept at the act of balancing musicianship and chaos on the majority of their records leading up to "Utgard". Even in just these first three songs though, the band shows a greater sense of absolute confidence in their ability to juggle the peaks and valleys of their ambitions. The musical ride remains admirably dexterous and exploratory throughout the rest of the record. "Homebound" is bolstered by a sense of hard rock swagger. "Urjotun" is an adventurous foray into intergalactic synth-metal, with bass and synth lines that could have rested comfortably within the confines of a lost GOBLIN-scored soundtrack. Another trek into cosmic black metal occurs with "Flight Of Thought And Memory", though that journey is slightly muted by the most caustic rhythm riffs of the record. "Storms Of Utgard" is punctuated by another dizzying display of proggy-shred guitar from Isdal, before "Distant Seasons" wraps the record with a shiny melodic-prog bow.

It has been many years now since ENSLAVED first invited their fan base to join them on a more expansive musical journey. That fan base has been well rewarded with every effort since, but a strong case can be made that "Utgard" is the most fruitful treasure to be found on that trip.