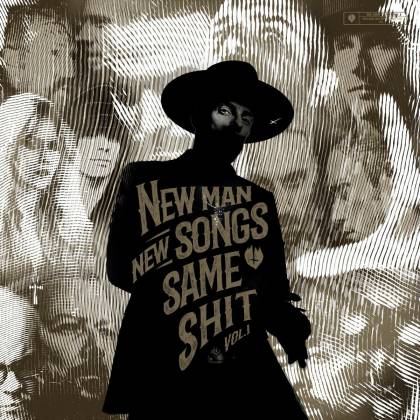 ME AND THAT MAN

Me And That Man

When BEHEMOTH driving force Nergal released the first ME AND THAT MAN album, "Songs Of Love And Death", back in 2017, it was a project — a collaboration, in fact, with folk musician John Porter — that instantly made complete sense to large swathes of the underground metal world. If you dug Nick Cave, WOVENHAND or Johnny Cash alongside your usual infernal favorites, it was aimed squarely at you. "My Church Is Black", in particular, was an absolute hell-banger. That debut was also an edgy, low key and enjoyably shambolic affair: the sound of a virtuoso metal player bearing his blackened soul in a new, less aesthetically forgiving context. Three years on, and ME AND THAT MAN still draws from the same influences and enables the Polish troublemaker to deal in simple horrors, rather than his usually baroque, intricate ones, but "New Man, New Songs, Same Shit Vol.1" has a vastly different vibe. The production is bigger, the arrangements fuller, and Nergal's confidence with this part of his creativity is manifest from rollicking start to downbeat finish.

There is a tiny downside to all this: with all but one of these 11 songs boasting a cameo from one metal and/or dark rock notable or another, it's impossible to escape the sense that this all sounds like tremendous fun and not quite the soul-wrenching musical exorcism the first album sought to be. But if you can cope with the notion of fun at this point in history, "New Songs…" delivers the goods, with a wicked glint in its eye and fingers twitching over a frayed holster.

Aside from once again proving that SHINING's Jørgen Munkeby is one hell of a singer, opener "Run with the Devil" is a distinctly average hard rock song which feels slightly out of place here, but from the boisterous "Coming Home" onwards, it's a boozy, blasphemous and subtly adventurous ride into hell's saloon bar.

One obvious highlight arrives when Nergal goes it alone and harks back to the previous album. "Męstwo" sounds more serious, less cartoonish and heartfelt in a way that "New Man, New Songs…" only occasionally touches upon. It's a tense but driving slice of dust-battered Americana, shorn of the novelty of 'Oh, it's so-and-so doing a sing!' and delivered deadpan. "Surrender" is very nearly as good, Nergal's distorted vox nudging convincingly towards demon-preacher territory and VOLBEAT's Rob Caggiano peeling off an effortlessly cool solo. "Deep Down South" is fun, too: banjos clatter, harmonicas wheeze and LUCIFER's Johanna Sadonis is as magnetically charming as usual, with some echoey whistling thrown in for maximum Ennio Morricone vibes. "How Come" showcases what a glorious voice Corey Taylor has over sweeping strings and a woozy, desert-blues waltz, while the closer, "Confession", makes exemplary use of Niklas Kvarforth (from the SwedishSHINING) and his unerring ability to make every word that comes out of his mouth sound like a threat, albeit generally to himself. Both IHSAHN's "By The River" and "Man Of The Cross" (featuring Jerome Reuter of neofolk legends ROME) edge the album a little further into authentic darkness, too. Meanwhile, TRIVIUM's Matt Heafy definitely has a future career as a country crooner, should the metal gig not work out: "You Will Be Mine" reeks of too many late nights and bad things happening in Nashville (quite possibly to Niklas Kvarforth).

Throughout it all, Nergal is having the time of his life and that's really the point of this. His enthusiasm is infectious, and these are all songs worth singing round the next satanic campfire you construct in your back garden. More beans, anyone?