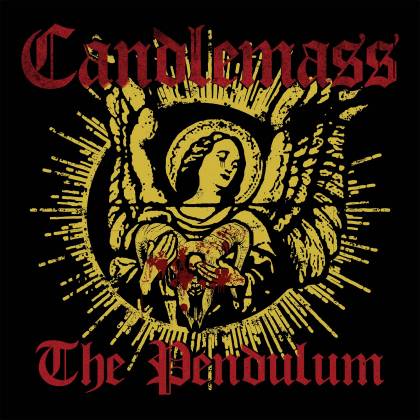 The elder statesmen of epic doom metal have returned hot on the heels of 2019's magnificent "The Door to Doom" with what is essentially part deux to that magnum opus with the brilliant EP titled "The Pendulum". Last year's long player found CANDLEMASS garner the grandest of heavy metal accolades in the form of their nomination for the 2020 Grammy Award in the "Best Metal Performance" category. It was for the song "Astorolus – The Great Octopus" that featured none other than metal god Tony Iommi of BLACK SABBATH. As tasteful as Iommi's performance was, and as much it contributed toward the Swedish metal veterans' commercial acclaim, what was truly the most significant "headline", if you will, about the album was that it marked the triumphant return of Johan Längqvist, the iconic vocalist who graced CANDLEMASS's pioneering 1986 debut, "Epicus Doomicus Metallicus". And Längqvist's star shines bright on "The Pendulum" as well.

The reason that the new EP feels like an extension of last year's heralded album is because it quite literally is exactly that. "The Pendulum" is a collection of unused songs culled from "The Door To Doom"'s recording sessions. But the EP doesn't feel like a batch of B-sides by any means. Quite the contrary, the songs are equally on par, in terms of quality, with those found on last year's album. When the EP is boiled down to its core parts, essentially half of the mere six songs are "actual songs"; in other words, three of the songs are instrumental. "The Pendulum" is short but sweet, and the sequencing was well thought out and methodical, significantly contributing to the release's impact.

A brief acoustic lull opens up the title track and the EP before a grim and gnarly upbeat and pseudo-thrash explosion turns the tide. Equally as monstrous is the demonic doom chorus that cuts right into the attack. The varied approaches continue to duel throughout the track, which is additionally adorned with a tasteful and gripping solo. The dramatically shifting musical dynamics truly match the lyrical and thematic nature of the song title.

An unashamedly SABBATH-ian doom drive carries the weight of "Snakes of Goliath", followed by an EP dividing coupling of instrumental tracks: the fluid and beautiful acoustic "Sub Zero" prior to the savage and barbarically bass heavy "Aftershock". The EP's final "proper" song, "Porcelain Skull", follows with a very similar energy, so much so that it's essentially a melding of the key elements of everything preceding it on the EP. The chorus stands apart as it surges with a nearly pop-laden hook, and the song builds toward a pseudo-Middle Eastern lick just prior to the frenzied solo. The EP's third instrumental, "The Cold Room", rounds out the effort and brings a sense of cohesion and closure with its calm and serene acoustic work that reflects the energy of the opening number's brief intro.

Few could have predicted that the Swedes would be as relevant as ever over 35 years after their inception. But here we are. Leif Edling — CANDLEMASS's driving force, primary songwriter, founding member and bassist — and his cohorts seem poised to unleash fantastic doom metal for years to come, judging by the incredible nature of last year's release as well as "The Pendulum". Whatever the case may be regarding the future, this classic epic doom metal band has recently released two of the most impressive efforts the genre has seen in years.