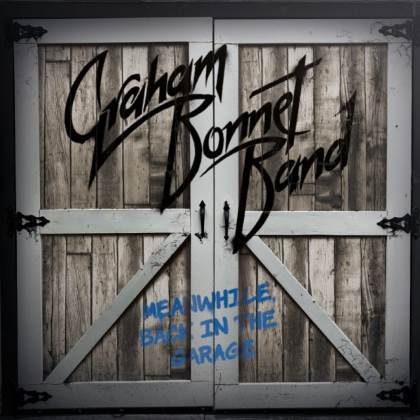 Meanwhile, Back in the Garage

Now in his seventh decade, Graham Bonnet has enjoyed a modest second coming of late. The famed ALCATRAZZ, RAINBOW, MSG and IMPELLITTERI vocalist has been cropping up everywhere in retrospectives and reissues, plus a career-resurrecting run with the Michael Schenker Fest. With his self-branded band, Graham Bonnet engineers an exciting rebirth of sorts, surrounding himself with a monster set of players in the form of Kurt James (guitars),Beth-Ami Heavenstone (bass),Jimmy Waldo (keys) and Mark Benquechea (drums). Lead and rhythm guitarist Joey Tafolla provides stellar session support.

Depending on whether you have a devoted or casual attitude toward Graham Bonnet, the frequent heaviness of this album may be a complete surprise. The fact "Meanwhile, Back in the Garage" culls from Bonnet's past habitats should be no surprise, but it all works far more than it doesn't. There's a lot of muscle flexing here, and not just from Bonnet's wringing esophagus.

The title track is an Yngwie Malmsteen-esque power number (the scheme repeated later in the album on "America...Where Have You Gone") with Joey Tafolla and Jimmy Waldo spooling notes in abundance. Waldo's organs create a buzzing backdrop for Graham Bonnet, who waits until the final third to grizzle up after flowing along smoother than expected in a number this loud. Bonnet colorfully describes the scene for the intensely performed tour narrative "The Hotel", inclusive of a "drunk guy pissing in somebody's doorway."

Somewhere between "Dangerous Games" era ALCATRAZZ and Bonnet's time in RAINBOW does "Livin' in Suspicion" lie, which does have a hook, if less urgency outside of Kurt James's blistering guitar solo. Then take the same coupling for the pumping retro pop rocker "Incest Outcest U.S.A."

Bonnet goes into snarling rock god mode set to the whiz-bang drives of "Long Island Tea", "Past Lives" and "Man On the Corner". Some other stout numbers are the galloping "Sea of Trees" and the ticklish LED ZEPPELIN-meets David Lee Roth ditty "Heading Toward the Light", the latter being one of Graham Bonnet's most savory performances on the album. Saved for the end, "The Crying Chair" is appropriately his most gut-wrenching.

A not-bad cover of Tina Turner's Mad Max ode, "We Don't Need Another Hero" gives Bonnet the opportunity to coddle his inner popster, and he has a blast with it. "Meanwhile, Back in the Garage" comes with an accompanying DVD featuring Graham Bonnet's appearance on "Live at Daryl's House", but the bigger story is the album itself. A lot of high-octane energy and some of the most ear-pleasing tones Bonnet has pulled from himself—ridiculously impressive at age 70—makes "Meanwhile, Back in the Garage" something of a sleeper hit. Hope springs eternal, 'nuff said.