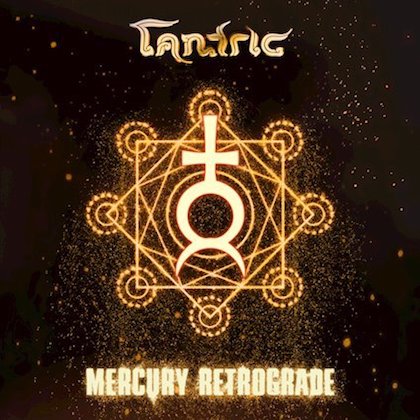 Flashback to the late nineties when DAYS OF THE NEW refugees Todd Whitener, Jesse Vest and Matt Taul found a distinctive voice in the form of Hugo Ferreira to join a little band originally called C-14, quickly rebranded as TANTRIC. Quickly, the band grabbed a coveted deal with Madonna's Maverick Records and was asked in 2002 to contribute the song "Cross the Line" for the "NASCAR: Crank It Up" compilation album. If you've been following TANTRIC since the beginning, you know what happened next.

TANTRIC's seventh album, "Mercury Retrograde", is the band's first material in four years. Aside from a revamped lineup, the album's highlight is its lead single, "Letting Go", a dust-off re-recording of a track from the shelved and still unreleased 2007 album, "Tantric III". Odd that "Letting Go" appears toward the rear of this hit-and-miss album, but we live in the age of the iPod, thus song placement on albums is hardly the concern of a singles-download society these days.

The well-structured march anthem "Angry" actually seeks a purging redemption in the midst of its pissy stomp rhythm and toothy riffs, with Hugo Ferreira serving up a woof-rap along the way. Ferreira's always had a unique voice in the crowded tundra of angst-laden barker-crooners of mainstream hard rock; thus, his varied pitches are the key to keeping the following track, "Tether", interesting. Bolstered by heaving choruses, "Tether" is rickety in spots, but pounces on the amped sections when they count. Ferreira drops gravelly chunks to compliment Jaron Gulino's lofty bass lines across the shuffle-slide of "Get 'Em All", one of the album's more inventive songs.

The album loses steam with two sleepy ballads, "Before You Could Crawl" and "My Forever", plus the poky "Lie Awake", the latter given some stride by Hugo Ferreira on the picked-up choruses. "My Forever" carries the grace of layered keys and this is where Ferreira lays down his most charming tones; he and the band further rescue the album with the moody yet terrific "Wannabe".

Time efficiency being one of "Mercury Retrograde"'s best attributes, despite an unnecessary cheat with the acoustic reprise of "My Forever", TANTRIC teases and pleases its fanbase by taking a minute step backwards, here redoing "Letting Go". The album feels like it wants to go back to the Maverick years, but the polish of those corporate-backed recordings is hardly here. Not to be mean, but fans keeping a crib sheet of in-and-out TANTRIC members in the past handful of years may yet want to keep their pencils sharpened.